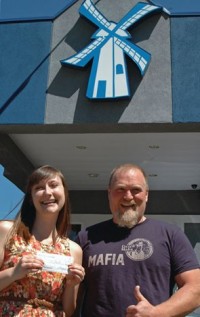 Byrd is a junior at EOU majoring in writing and history and said the $300 scholarship will help pay for books for her summer classes.

This isn’t the first time a member of the Byrd family has gotten lucky in the Dutch Bros. raffle. Maggie’s sister Emily collected a scholarship when Bob Davies, EOU president, drew her name from the jar two years ago.

The scholarship for winter term went to Jeff Rysdam, of Elgin. A regular patron at Dutch Bros., he said the $400 award covered the cost of books with a little leftover to put toward other school expenses. Rysdam is a senior sociology student at EOU pursuing a career in juvenile probations.

Marc Lee, owner of the La Grande Dutch Bros. franchise, is excited for the coming fall when he will sponsor two scholarships at a minimum of $300 each.

No purchase is required to enter the drawing and all current EOU students are eligible to win. Simply stop by Dutch Bros. Coffee on Island Ave. and fill out an entry form.