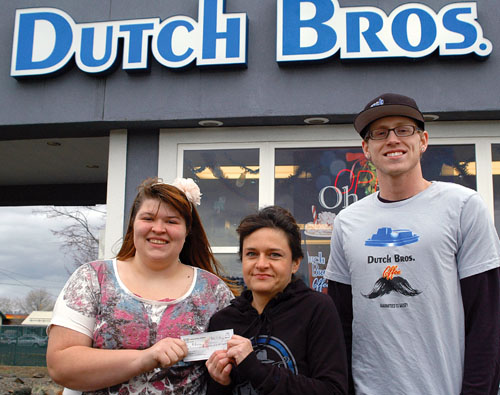 EOU student Athena Pierce, left, is the happy recipient of a $1,000 scholarship from Dutch Bros. She is pictured with franchise owner Angela Lee and barista Thayer Marvin.

LA GRANDE, Ore. (EOU) – Athena Pierce’s frequent early morning coffee stops on the way home from her swing shift at Wal-Mart have paid off in a big way.

The recent scholarship raffle at the local Dutch Bros. Coffee franchise culminated this week when Pierce learned she was the recipient of a $1,000 award.

Pierce, a sophomore majoring in math at EOU, said she’ll use the sizable check to cover the cost of her books.

“It might even be enough for the entire year!” Pierce said.

After she graduates, Pierce wants to either pursue her master’s or join Teach America and hopes to share her love of math with high school students. She is from Summerville.

Dutch Bros. franchise owners Mark and Angela Lee encourage more students to enter the  scholarship drawing, which is held every term. No purchase is required and all current EOU students are eligible to win. Simply stop by Dutch Bros. Coffee on Island Ave. and fill out an entry form.