Drawing, sculpture and ceramics on display 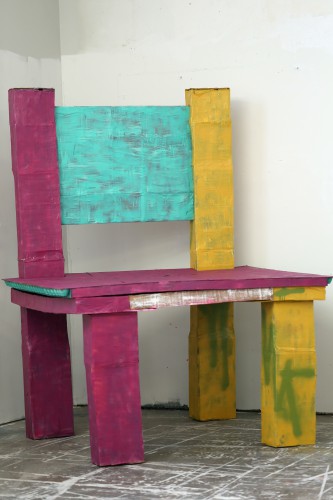 May 2, 2018 LA GRANDE, Ore. –  Drawing, sculpture and ceramic work by three Eastern Oregon University students will be on display in EOU’s Nightingale Gallery starting at 6 p.m., on May 11 with a reception for the artists.

“They draw on past experiences to create a process for understanding the world around them and how it relates to their physical and emotional environments,” she said.

Bradbury grew up in a poverty-stricken home, and discovered ways to express herself with found objects. Her interest in art brought Bradbury to EOU, where she studied for four years until a medical emergency with her son forced her to leave school shortly before completing her degree.

She returned to EOU in 2017. As she observes the everyday objects that surround her, she said she is inspired by their simplicity and functionality. Her family life also influences Bradbury’s work. Large chairs and blankets create forts. Masks change one’s character in times of play, and a tree represents her core, as well as capturing a fantasy-like aspect of play. 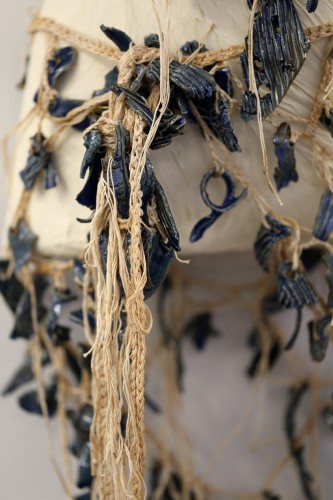 Desmond was born in New York state to parents who had a penchant for roaming. Following a relocation to New Mexico, she spent her childhood on airplanes, returning home to visit family whenever possible. Desmond spent many hours with her head in the clouds voyaging to parts both known and unknown. She said she may have a fair amount of roving wanderlust in her blood, thanks to a Hungarian grandmother.

Desmond’s wearable ceramic work is derived from her journeys, both literal and figurative, and is a flight into fanciful places others may not yet be able to see. It is an escape from what existed in the past, part functional costuming and part breakable adornment of the human figure. She said her work is an imaginative leap into the future and an expression of what it means to break free from adversity. 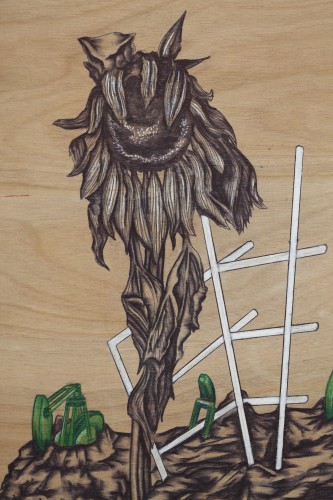 Garcia grew up in Gardena, Calif. and said his inspiration stems from a childhood fascination with comic books. From an early age, Garcia pursued an interest in illustration. On the weekends, he religiously watched cartoons before assisting his father in the family’s construction business.

His father’s work in residential construction directly influenced Garcia’s artistic development, both stylistically and in terms of the materials Garcia utilizes in his work. Garcia’s artwork consists of ballpoint pen drawings on wood, integrating this familiar medium into a broader context and expanding the potential of a common desk pen.

While Bradbury’s, Desmond’s and Garcia’s works appear to be significantly different conceptually and stylistically, notable similarities tie their work together.

“All three artists draw from a well of youthful experiences in order to process and delineate an ongoing exploration and synthesis of what they observe and interpret about the world around them,” Desmond said. “This idea of ‘Perspective’ is the unifying thread that shows a relationship between their different past experiences and how it relates to their current physical and emotional environments.”

The gallery, located in Loso Hall, is open from 11 a.m. to 4 p.m., Monday through Friday. For more information, visit eou.edu/art or follow the Nightingale Gallery on Facebook and Instagram.