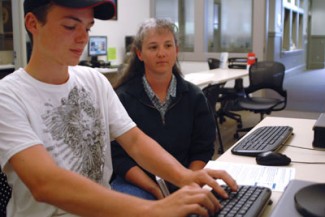 Photo by Laura Hancock / With a little help from his mother Shannon, Tyler Faulkner, of Elgin, registers to take the new computerized GED tests during a tutorial at EOU Monday.

June 14, 2012
LA GRANDE, Ore. (EOU) – Union County residents seeking completion of general education development tests will soon have access to a computer-based version of the GED that is revolutionizing how high school credentials are obtained.

Eastern Oregon University has partnered with GED Testing Service to offer the tests on computer beginning Wednesday, June 20. It is the first location in the Northwest to launch the new system.

A limited number of applicants will be accepted to take the GED at the EOU testing center on Wednesday. Participants are invited to celebrate the launch at an evening reception from 5-7 in the Badgley Hall foyer.

Cathy Trochlell, continuing education coordinator at EOU, will provide a tutorial of the computer-based test from 12-3 p.m. Monday, June 18 in Inlow Hall, Room 108. Online registration also opens Monday and assistance will be available during the tutorial.

The cost is $31 per test subject and there are a total of five subjects. Students may take each test up to three times until they pass successfully. The EOU Foundation will provide scholarships covering the cost for applicants taking tests on the day of the launch.

After June 20, access to GED tests on computer will be available for 35 hours each week, Monday through Friday, from 9 a.m. to 4 p.m. in the testing center located in Badgley Hall, Room 105.

The computerized tests are comprised of the same content currently offered on paper, but the accompanying systems will provide an array of new benefits for both GED test-takers and EOU’s testing center.

“We want to provide a more expedient testing system to help our community members overcome their GED hurdles using the most comfortable testing environment that we can provide,” said Travis Paulson, testing coordinator at EOU.

Some of the initial benefits of the computer-based system include around the clock, one-stop online registration and scheduling, flexible testing appointments, instant test scores on all but the writing exam, an introduction to basic keyboarding and computer skills and enhanced test security.

These new features will improve the GED testing program, which is a gateway for adults to find jobs, qualify for better paying positions, enter the workforce or college training programs, and better support themselves and their families.

“GED testing on computer will be a significant step to make the scheduling and testing experience easier, more flexible and faster for adult learners across the state and eventually the country. We are so pleased that Eastern Oregon University is our partner in this important endeavor,” Trask said.

The area Training and Employment Consortium is working with students already in the process of taking the GED on paper to complete their tests, but is phasing out the paper version and referring new applicants to EOU.

Paper-based tests will still be available through the testing center at Blue Mountain Community College in Pendleton.

While testing and scheduling on computer is a significant new benefit, GED Testing Service warns consumers there are those who will attempt to bilk unsuspecting students out of precious dollars by creating confusion online.

“The GED test, whether on paper or computer, must be taken in-person at an official testing center,” Trask said. “Potential test-takers should not respond to individuals or so-called ‘institutions’ offering an online GED test.”

A new GED assessment is scheduled to be released in January 2014. Test-takers who have not completed or passed all five subject areas will need to finish their testing before their scores expire when the new assessment begins.

Applicants are required to bring government issued photo ID to the testing center. Anyone ages 16-17 must also procure paperwork demonstrating their exemption from compulsory attendance with their local school district.