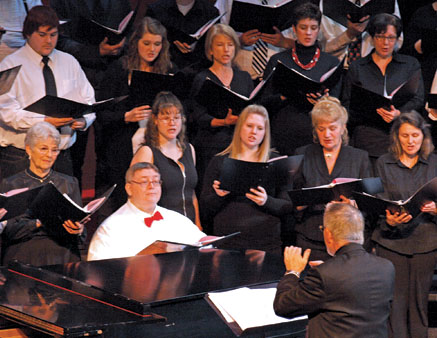 The choirs, under the direction of J. Michael Frasier and Peter Wordelman, will be assisted by accompanists Mio Aoike and Lanetta Paul, along with a number or guest instrumentals. The concert culminates the musical activities of the Community Chorus for the 2014-2015 season, and is the final concert of winter term for EOU’s Chamber Choir.

Sponsored by ArtsEast, the 55-voice Grande Ronde Community Chorus will open the concert with a stirring arrangement of “The Star Spangled Banner,” accompanied on trumpet by Wordelman. “Homeward Bound,” a contemporary choral work that has become a theme song for soldiers returning from war, will follow.

The Chamber Choir will perform a mix of pieces from previous concerts including “Season’s of Love” from the Musical “Rent,” a piece by Dolly Parton entitled, “Light in the Blue Morning,” “Requiem,” by Eliza Gilkyson, and “She Walks in Beauty,” by Kevin Memley.

The concert will close with the Community Chorus performing a set of “Americana” songs chosen in commemoration of the 150th anniversary of the incorporation of La Grande. This incorporation was made official by an act of the legislature and approved on December 18, 1865. “Skip to My Lou,” a rousing arrangement for four hand piano accompaniment, will be followed by “The Water Is Wide,” with accompaniment provided by piano and an instrumental ensemble consisting of faculty members Steve Tanner and Katherine Fetz, along with EOU student Rachel Kecskes. They will then perform “Shenandoah,” and close the concert with an arrangement of “Cindy,” joined on stage by the Chamber Choir and Teun Fetz on xylophone.

The concert promises to be both fun and diverse and the community is invited to attend. There is no admission charge, but donations will be accepted at the door with proceeds used to support choral programs provided by ArtsEast in partnership with EOU. The Grande Ronde Community Chorus is made possible in part by support from its members and Red Cross Drugs in La Grande.

About the conductor: Longtime choral director and educator, J. Michael Frasier begins his sixth year as musical director of the Grande Ronde Community Chorus. He strives to make the rehearsals and performances a balance of fun, social interaction and quality music making.

Frasier holds a bachelor’s degree in choral music education from Central Washington State College and a master’s of music in vocal performance from Eastern Washington University. His experience includes 30 years of public school teaching where he oversaw a dynamic choral program along with teaching classes in musical theatre, drama and leadership. In 2002 he was honored as Union County Educator of the Year. Choirs under his direction have received many honors including first place at the Oregon State High School Choir Championships in 2001, 2002, and 2003 and numerous awards in vocal jazz and musical theatre.

About ArtsEast: Since its founding in 1977 as a 501 (c) 3, ArtsEast has inspired interest and participation in the arts across eastern Oregon. Based on the EOU campus in La Grande, ArtsEast provides Artist-in-Residence programs in regional schools and oversees the Community School for the Arts program, which hosts private music lessons for children and adults, the Community Symphonic Band, the Community African Drumming group, the Union County Children’s Choir and the Grande Ronde Community Chorus. Most recently, ArtsEast has expanded its services through a merger with the Art Center at the Old Library located at 1006 Penn Avenue in La Grande.  ArtsEast’s efforts are supported in part by its members and local and regional foundations. For more information visit www.artseast.org  or call 541-962-3629. For more information about art classes and programs offered at the Art Center at the Old Library call 541-624-2800 or visit artcenterlagrande.org.