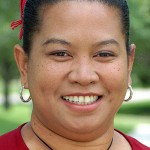 Bennie Moses-Mesubed is the primary relationship manager for EOU’s partnership with TheDream.US.

Oct. 6, 2017 La Grande, Ore. − Eastern Oregon University was recognized Sept. 30 at one of the nation’s most prestigious diversity and inclusion conferences.

Minority Access, a nonprofit committed to increasing diversity, decreasing disparities and reducing environmental injustice, hosts the National Role Models Conference each year in Washington, D.C., and honors institutions committed to diversity in the coming year. The organization bestowed this special honor on EOU at its 18th annual gathering.

The distinction recognizes universities committed to increasing the pool of scholars from underrepresented populations. Selected institutions will be recognized during lunch on Oct. 1 for their significant role in providing equal access to quality higher education.

“EOU stands out among small, rural institutions for its multicultural programs that set us apart as an institution,” said Bennie Moses, director of EOU’s Multicultural Center.

The honor comes after Diverse, an online publication that investigates diversity in higher education, ranked EOU among the top producers of Native American graduates in the nation.

EOU landed at No. 77, tied with Evergreen State College, Humboldt State University and others.

“Over the last few years EOU has strived to increase our recruitment and retention efforts in the region, which has included outreach and community building with tribes across the state,” said Diversity Committee Chair Tawnya Lubbes.

The university added a Native American Program Coordinator to its staff this fall in an effort to further boost recruitment and retention of Native American students. Korin Bradley started work in August and already has plans in mind for the rest of this year.

“Native American students have a complex history with institutions of higher education in this country,” Bradley said. By expanding our Native American support services and cultural events, I’m hoping that indigenous students will both see and feel that EOU is a great place to be, a respectful environment they can thrive, grow, and be successful within.”

Bradley is organizing a series of events to take place in November for Native American Heritage Month that highlights the unique Native history at EOU.

To learn more about diversity and inclusion at EOU, visit eou.edu/mc.