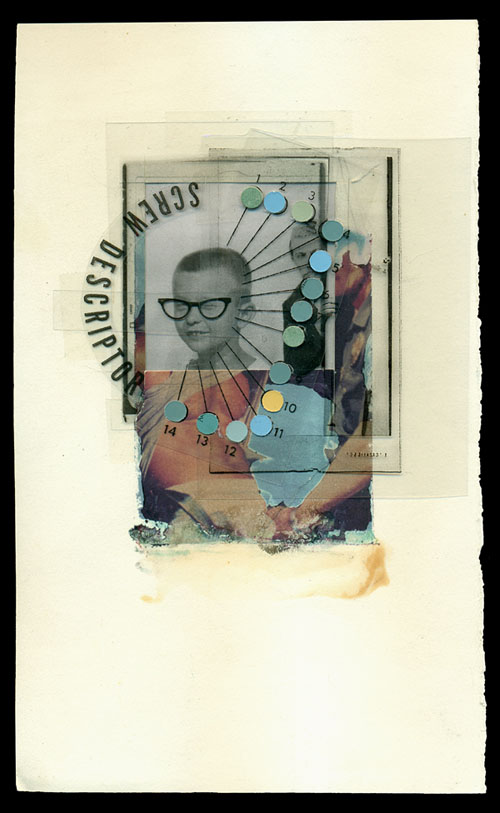 This upcoming show follows Peeke’s recent guest appearance at the Saranac Art Projects‘ exhibition in Spokane and the debut of the winter issue of Gambling the Aisle, featuring his artwork on the cover and an in-depth interview on page 16.

“The largely ignored and seemingly inconsequential bits of ephemera that once had a purpose, still have a presence, but now idle in disuse. I combine, layer, juxtapose, glue, tape and re-contextualize these bits and pieces of detritus in order to reincarnate and recharge them,” the artist says.

“Through the process of collage, these snippets of the past combine to become at once something fresh and familiar. They both exemplify and explore the duality that is the transient, disposable nature of our culture, as well as the necessity to create tradition and solidify a cultural continuity.”

In addition to his studio practice and duties as gallery director, Peeke teaches art and art history at EOU and is a contributing writer for Kolaj Magazine. He is represented by Gallery IMA in Seattle.

Peeke received his bachelor of fine arts from Kendall College of Art and Design and a master of fine arts from the University of Idaho. He has exhibited in numerous solo and group exhibits throughout the U.S. and abroad, and his collages have appeared in multiple publications. His works are included in the permanent collections of EOU, Lockhaven University, the Solara-Simpson Housing Group and the International Museum of Collage, Assemblage and Construction.