“Choirs of the Valley” perform Nov. 14

Groups converge for “Choirs of the Valley” concert, Nov. 14 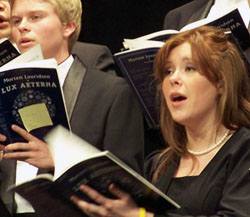 Admission is by donation to the 7 p.m. concert in McKenzie Theatre in Loso Hall.

“This concert brings singers of all ages together in a life-long activity that is good for the soul,” said Peter Wordelman, professor of music and associate dean of EOU’s College of Arts and Sciences.

Program highlights include the children’s choir performing the debut of “Liberty” composed by John McKinnon, professor of music at EOU. Caite Debevec will conduct the piece.

The work of another eastern Oregon composer, Joshua Rist, will also be featured. His song “Invictus” was originally composed for piano, cello and choir, but for this concert it will be heard with trombone instead of cello. Rist is the choir director at Hermiston High School.

A new piece by Eric Whitacre, “Fly to Paradise,” features eight soprano soloists and a recorded background track produced in EOU’s sound studio with the assistance of Luke McKern.

Audience members will also get a preview of the full production of “Les Misérables” opening at EOU in May with the song “One Day More.”

The concert is sponsored by Red Cross Drug Store in La Grande.

« Community invited to weigh-in on governance options | Colloquium: Writing and filming the unspeakable »