“Choirs of the Valley” perform Oct. 16

“Choirs of the Valley” converge for Oct. 16 performance 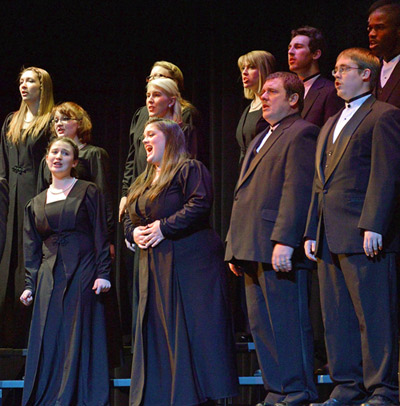 LA GRANDE, Ore. – The largest “Choirs of the Valley” concert sponsored by Red Cross Drug Store is coming up Thursday, Oct. 16 at 7 p.m. in McKenzie Theatre in Loso Hall on campus.

“The concert promises to be fun, lively and full of wonderful singing,” said Peter Wordelman, professor of music and director of the EOU Chamber Choir.

The audience will also be treated to performances by high school choirs from La Grande, Baker, Milton-Freewater and Hermiston.

These high school choirs, including Pendleton, have joined together to form the Eastern Promise Regional Choir, a pilot project through Eastern Promise. With nearly 60 participants, the project allows students to gather once each term to rehearse and perform.

A Feb. 21 performance is planned by the Eastern Promise Regional Choir at 2:30 p.m. in the Loso Hall lobby at EOU.