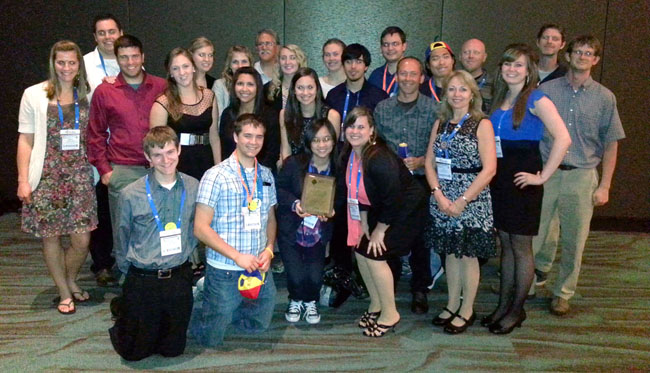 May 15, 2013
LA GRANDE, Ore. (EOU) – The chance to share scientific research with a captive audience of peers and professionals is an opportunity EOU Chemistry Club members get excited about.

A group of 19 students and five faculty each had their moment to do just that while attending the American Chemical Society’s (ACS) National Meeting and Exposition in New Orleans April 7-11.

More than 15,000 people were there. Kelsey Irish, an EOU senior from Sherwood majoring in biochemistry, was one of them.  She is part of a group using nuclear magnetic resonance to analyze alkaloids when dissolved in different solvents.

“The ACS is the largest professional society in the world, so presenting our research posters and being part of the meeting is a big deal,” Irish said.

But that’s not the only reason Irish and her fellow students had high spirits. The ACS selected EOU’s club as the only student-member chapter in Oregon to receive an Outstanding Award. Only 40 others garnered this top honor out of approximately 1,000 clubs from across the nation. 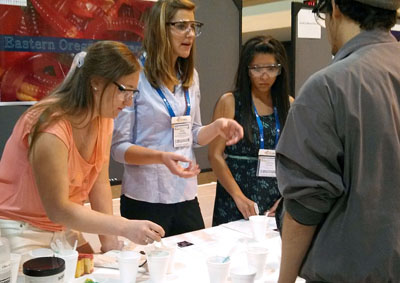 “We beat out Ivy League schools, which is pretty cool!” said Irish, who accepted the award on behalf of the club as its president.

When choosing recipients, the ACS looks at outreach activities during the previous academic year. EOU’s participation in a global water-monitoring project funded by the Division of Analytical Chemistry in 2011-12, in addition to ongoing youth programs like Saturday Science and Girls in Science, helped place the club at the forefront.

University students and faculty worked with six area elementary and middle school teachers and their classes for the water-monitoring project. They organized workshops and field trips, including one to test the water in Morgan Lake, providing a format for teachers to recreate.

“Getting kids excited about science is the goal of our youth outreach and chemistry awareness programs, and we’re also very community focused,” Irish said. “We do magic shows a lot. They’re the most exciting!”

By magic, Irish is referring to chemical reactions such as exploding hydrogen balloons or “elephant toothpaste,” a frothy substance created with dish soap, yeast and high-percentage hydrogen peroxide.

The club exhibited another crowd pleaser – combining sodium alginate, calcium chloride and a dash of food coloring to make edible gummy worms – for the Chem Demo Exchange, a program they participated in while at the ACS meeting.

“Our students were absolutely wonderful,” said Anna Cavinato, chemistry professor and club advisor. “The ACS does such a good job of involving undergraduates at the conference. They can network, look at different graduate schools and meet scientists in their field. It’s an eye-opener to the professional world.”

Membership in the Chemistry Club this year averages between 40-50 students. The 19 who went to New Orleans are also ACS members. EOU’s Student Senate and the Richland Section of the ACS funded a portion of their trip, with students raising additional money on their own.

Visit the Spring Symposium at EOU May 15 for an opportunity to learn more about the research these and other undergraduates are conducting across disciplines. For details see www.eou.edu/sprsymp.