EOU invites involvement to change the conversation on millennial generation

During his visit, Imada will lead a series of discussions focused on current initiatives of the National Millennial Community he founded in 2015 and which EOU is a member.

Imada, who was born in Ontario, Ore., is the founder, chairman and chief connectivity officer of IW Group, Inc., a minority-owned and operated marketing agency in Southern California. He has represented some of the nation’s largest companies and brands including McDonald’s, American Airlines, Coca-Cola, Verizon Wireless, Warner Bros. Pictures and Disney Imagineering.

“Everyone is invited to join the conversations on millennials and inclusion, access and workforce development,” said Justin Chin, Career Services Director at EOU.

For the National Millennial Community and the students studying business, communications and marketing who comprise EOU’s Millennial Community, changing the conversation on the millennial generation involves strategically and intentionally being at the same table with leaders and influencers in business, education, entertainment and government. 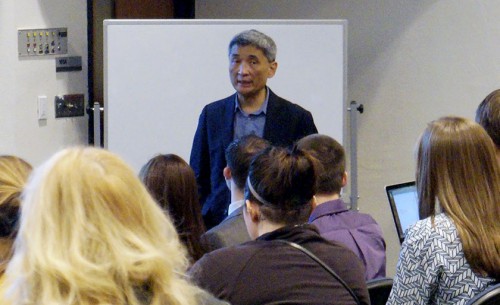 “The National Millennial Community, under the leadership and guidance of Bill Imada, has placed EOU in a position of influence with numerous chief executives and government officials who value inclusion, diversity, equity and access,” Chin said. “In our second year of existence as a group, Dr. Shari Carpenter and I have been fortunate to coach, mentor and grow professionally with a group of talented, driven and passionate students.”

Carpenter is an associate professor of business and serves as co-advisor with Chin for EOU’s Millennial Community. They have seen students give presentations to international public relations and marketing executives, co-direct and lead videoconferences discussing millennials in the new workforce and most recently, participate in a series of radio conversations with NPR offering advice to Generation Z.

“I am most excited by the fact that it is students who are maximizing their opportunities,” Chin added.

April 12: View the “behind the scenes” making of a National Millennial Community executive call with EOU’s own Cody Singer co-leading the conversation with a chief marketing and communications officer from a major engineering and construction firm based in Los Angeles, Calif.

April 13: “Change the Conversation” with Bill Imada during his keynote with EOU students, alumni, community members and friends. Be inspired and ready to challenge the idioms that hold you back: “Think inside of the box before you think outside of the box.”

April 14: “Millennials Moving the IDEA Forward:” Millennials from underserved and diverse backgrounds play a major role in creating and fostering the IDEA (Inclusion, Diversity, Equity and Access) as we move forward. Join Bill Imada and students in a discussion of how millennials at EOU can be leaders in change.