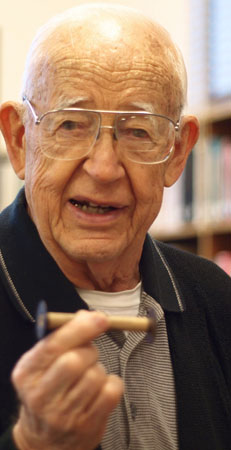 Hill, a World War II veteran, accomplished photographer and distinguished EOU alumnus, has taken numerous award-winning images that negotiate a full spectrum of visual interest – from the historical and documentary, to the aesthetic and personal.

Speakers at the event include Hill and his family, fellow military veterans, photographer Eric Valentine, author and EOU professor emeritus George Venn, and other members of the university’s art, English and writing faculty.

Karen Clay, director of EOU’s Pierce Library, will acknowledge Hill’s significant and ongoing photographic contributions to the library, including his donations of complete WW II and historical collections.

Audience members will also be invited to share experiences and appreciations.

Hill began practicing photography at a young age. He was born in 1920 in Elgin and attended Eastern Oregon Normal School, during which time he became friends with the soon-to-be famous fine arts photographer Minor White. Together they enjoyed documenting northeast Oregon scenes until 1943, when Hill shipped out to the Pacific Theatre as a photography lab chief with the 17th Photographic Reconnaissance Squadron, Fifth Air Force.

After his discharge in 1945, Hill reconnected with White and began studying under Ansel Adams at the California School of Fine Arts. He launched a successful 39-year career as a commercial photographer and shortly after returning to Union County his work achieved national recognition.

Hill published “Darkroom Soldier” in 2007, a book containing hundreds of photographs and letters he sent to his late wife Martha while he was in the service. Now rare and out-of-print, the volume was named a National Best Books Finalist in 2008.

EOU presented Hill with its Distinguished Alumnus Award in 2011 and hosted a screening of “The Jungleers in Battle: A Documentary of the 41st Infantry in WWII” in 2013.

Admission to the program is free and seating is limited. Refreshments will be served. For more information contact Eric Valentine at evalenti@eoni.com or George Venn at gvenn@eou.edu.