August 14, 2013
LA GRANDE, Ore. (EOU) ⎯ An Eastern Oregon University chemistry professor is being recognized in a big way by one of the world’s largest scientific organizations.

Anna Cavinato is joining an elite group – the 2013 class of American Chemical Society Fellows – and will be celebrated along with 95 others at the society’s national meeting in Indianapolis Sept. 9.

“This is truly an honor for Professor Cavinato and our university,” said Bob Davies, EOU president. “I am thrilled ACS has chosen to acknowledge her many accomplishments, both professionally and personally, in such an important and prestigious way.”

“EOU is now the only university in Oregon with two recognized ACS Fellows, which exemplifies just how talented our teaching faculty are,” Davies added.

Richard Hermens, professor emeritus of chemistry, earned distinction as an ACS Fellow in 2012. He retired from EOU in 2001.

Current ACS members are nominated by their peers and chosen by committee based on their outstanding achievements in scientific research, education and public service.

“I am sincerely grateful to my colleagues, locally and nationally, for supporting my nomination,” Cavinato said. “Being selected as a fellow is a tremendous privilege.”

Cavinato’s involvement with the society includes serving a three-year term as secretary of its division of analytical chemistry. She is also the advisor for EOU’s very active student chapter, whose members participate in numerous community outreach activities like Girls in Science. 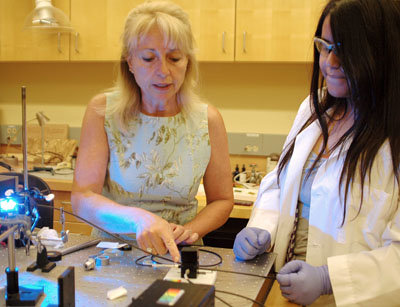 Cavinato works with Jessica Nava, an intern from Irrigon High School, to measure the emission by fluorescent labeled DNA.

The ACS also looks at original research of nominees. Cavinato is leading the first phase of a grant-funded study to identify small strands of DNA that will be used to build a biosensor. Once developed, the biosensor will change the way fish and wildlife managers detect bacterial kidney disease in salmon and help curb spread of chronic infection.

Read more about Cavinato’s research at www.eou.edu/news-press/bkd-biosensor. For additional information about the fellows program, including a list of individuals named in earlier years, visit www.acs.org/fellows.