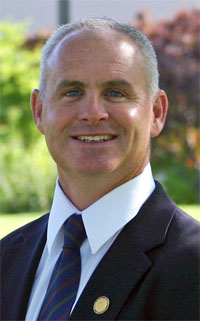 Cashell, who is in his eleventh year at EOU, will begin full-time as the conference commissioner on July 1. He has served as interim commissioner since January 2012, when Dave Haglund left the CCC to become commissioner of the Great Northwest Athletic Conference. Cashell’s last official day at the university is May 11.

“First, let me say that Rob has done a tremendous job for EOU,” said EOU President and CCC Council of Presidents Chair Bob Davies. “He has dedicated himself to our student-athletes for the last 11 years, and he will be missed. At the same time, the Cascade Collegiate Conference is extremely lucky to have the caliber of someone like Rob taking the helm. He was unanimously supported by the presidents of each of the member institutions and is recognized throughout the nation for his leadership, vision and commitment.”

The search process yielded 54 applicants from around the country and boasted candidates from both the NAIA and NCAA levels — including current conference commissioners and associate commissioners, athletic directors and individuals from other national athletic associations and professional teams.

“It was a very deep pool that was rich with talent,” Davies said. “In the end, Rob was the clear choice. He epitomizes the true spirit of the student-athlete that is the hallmark of the Cascade Conference and the NAIA. He is a true ‘Champion of Character’ and is a working symbol of what the NAIA and its member colleges and universities stand for.”

EOU Women’s Basketball Head Coach Anji Weissenfluh will serve as acting athletic director until a successful search for a new director is completed.

“I am excited and honored,” Weissenfluh said. “Rob has done an outstanding job and I hope that I can fill his shoes. The Cascade Conference is getting an outstanding commissioner. If his accomplishments at Eastern are any indication of the success he will have as commissioner, the conference is in wonderful hands.”

“I have always been impressed by Anji’s commitment to the balance of the student-athlete: perform well in the classroom, be role models in the community and be competitive on the court,” Davies said. “I know that she will bring this same level of passion and commitment to her role as our athletic director.”

While at EOU, Cashell served on the President’s Executive Cabinet and oversaw the Division of Athletics which is home to 12 intercollegiate programs. Since 2006, Mountaineer teams have placed first, second and third in the then formed Cascade Collegiate Conference All Sports Award balloting, never finishing lower than fourth in the 10-member conference.

“I am honored to have been chosen as the Commissioner of the Cascade Collegiate Conference,” Cashell said. “I believe we have the finest conference in the NAIA and I am eager to support the nearly 2,000 student-athletes and athletic staffs who represent our 10 campuses.”

Prior to joining the Mountaineers, Cashell served as Athletic Director at the University of Montana Western from 1996-2001 and was the first full-time athletic director in the school’s history. A native of Montana, he earned his bachelor’s degree from Montana Western in 1990 with a Health and Physical Education major, and a minor in History. He received a Master’s Degree in Counseling and Career Services from Montana State University-Northern in 1994.

During his tenure at EOU, the Athletic Department saw significant change. Starting in 2001, Cashell oversaw over $3 million worth of renovation projects which included an expanded fitness center and private team locker rooms, a new competition soccer field and football practice field, newly constructed press boxes, a booster suite, restrooms and concessions at Community Stadium, a resurfaced track, reconstructed softball field, and Quinn Coliseum upgrades to the main gymnasium. In addition, private support for athletics has increased over 300 percent.

In 2003, Cashell guided the department in its efforts to seek sole membership in the NAIA and joined the highly respected Frontier Conference for the Mountaineer football program. Athletic scholarships were also started in 2003 and current Mountaineer student-athletes benefit from over $600,000 in available aid from the university and EOU Foundation.

Rob and his wife Heather, who is an executive assistant in the Office of Student Affairs, are the parents of two daughters, Hanna and Elizabeth.