Supporting the arts at EOU 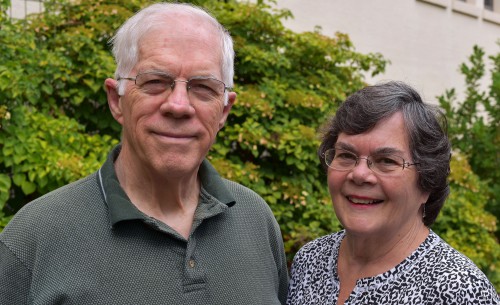 La Grande residents Carol and Doug Campbell made an additional gift to a scholarship Carol established in 1998 in memory of her late mother and father, Edna and Frank Paris, who were enthusiastic advocates for the arts.

Carol grew up in La Grande and attended the Ackerman Lab School at EOU. Her parents, who lived near campus, regularly took the steps of EOU’s Grand Staircase to watch performances in the old theater in Inlow Hall.

“Music and theater was their entertainment, so when the time came I decided their scholarship should support the arts,” Carol said.

Doug also has strong ties to the university, where he is a professor emeritus of chemistry with a 38-year tenure from 1962 to 2000.

Since its inception, the Edna and Frank Paris Memorial Scholarship has been awarded 16 times and provided a total of over $7,000 to students. The Campbell’s new contribution will significantly increase the award for the 2016-17 academic year and beyond, providing over $1,000 each year for students.

“Helping students go to school is what it’s all about, and any help you can be is better than no help at all,” Carol said.

The scholarship is intended for EOU music majors in their sophomore year or above, and active participants in the university’s music programs with a cumulative GPA of 3.25 or higher.

“Gifts like this allow the EOU Foundation to provide much needed scholarship support to deserving students,” said Mike Allstott, foundation president. “Privately funded scholarships awarded through the foundation for the current academic year will provide over $425,000 to students, making the dream of a college education a reality.”

Well-known in the area as the owners of McGlasson’s Stationery for nine years, the couple retains a visible presence dedicating time and energy to numerous efforts including the La Grande Main Street Downtown program.

Carol is a member of a local P.E.O. chapter and is looking forward to attending the philanthropic organization’s national meeting as a delegate this fall. She also plays in a handbell choir, while Doug sings baritone and was a member of the former Blue Mountain Barbershoppers.

When she and Doug first met, it was over sheet music at their church choir. With contrasting backgrounds in chemistry for Doug, and clothing and retail for Carol, it was their shared love of singing that provided a point of commonality to start a lasting relationship now approaching 30 years strong.

Arts advocates, music teachers and other supporters have created several scholarships with the EOU Foundation similar to the Campbell’s in honor or memory of individuals who shared the long-term vision of growth and development of EOU’s role in the artistic community.

“It’s a legacy worth having,” Doug said. He and Carol have also established a bequest with the EOU Foundation.

For more information on the Edna and Frank Paris Memorial Scholarship and other awards, go to www.eou.edu/foundation/scholarships.