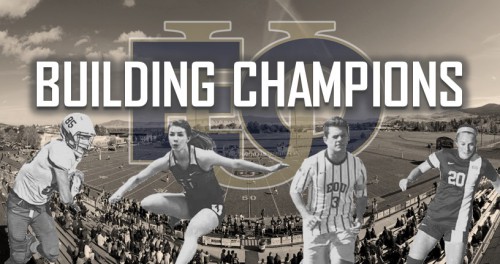 May 2, 2018 LA GRANDE, Ore. – Major renovations to Community Stadium and track and field facilities have begun to transform the south side of Eastern Oregon University’s campus.

With support from donors, alumni and local businesses, the $2.9 million Building Champions campaign promises to dramatically improve EOU’s outdoor athletic spaces. Funding efforts by the university and EOU Foundation have already garnered about two-thirds of the required resources, leaving approximately $800,000 left to raise from private sources before fall sports kick-off in late August.

“This project would not be possible without the generosity of our donors, and we are very grateful for their support,” said head football coach Tim Camp. “Athletic events bring our campus together and inform people across the nation about the opportunities available to students who choose to make EOU their academic home.”

First steps toward installing synthetic turf in Community Stadium began last week. Additional upgrades to the venue include more efficient lighting and increased accessibility for people with disabilities. The university’s track and field facilities will also undergo a much-needed renovation to lay a new, modern running surface and update areas for jumping and throwing. 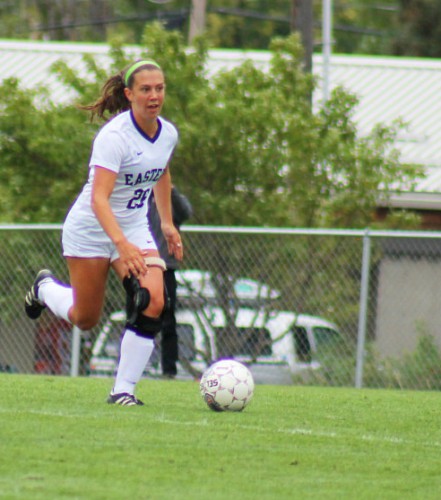 Synthetic turf is expected to make a big difference for soccer and football players looking to maximize their performance. Cailin Koupal, a sophomore and member of the women’s soccer team, said she had only played on turf until her arrival at EOU.

“I prefer playing on turf because it makes you faster and we have a fast team,” she said. “Plus, it’s totally flat and smooth, whereas the grass field is a little tilted.”

Koupal said she also looks forward to competing under the lights at the stadium. Lighting improvements allow men’s and women’s soccer to utilize the popular night game schedule the football team has recently adopted.

Matthew Kirkendall and his track and field teammates are eager to eliminate the 160-mile round-trip to Hermiston, where EOU hosts home track meets because of the crumbling running surface on campus.

Kirkendall, a senior majoring in community health and exercise science, came to La Grande from Riverside, Calif., said he suspects many of the aches and pains his teammates suffer are a direct result of the worn-out track.

“It’s been a little bit of a struggle, honestly,” he said. “Concrete is poking through where there’s supposed to be a layer of track material, and that’s tough on athletes.”

Kirkendall also said the team has had to resort to running in hallways, gyms and on grass at times, and wearing competition cleats during practices is hard on athletes’ legs.

Kirkendall, who broke a 55-year-old record in the 110-meter hurdles and qualified for NAIA nationals in two hurdling events this year, came to La Grande from a city of nearly 3 million people. He said the tight-knit community has made it easy to call this college town home.

“I have more connections here in La Grande than back in Riverside,” he said. “It’s really nice that that’s a thing here.” 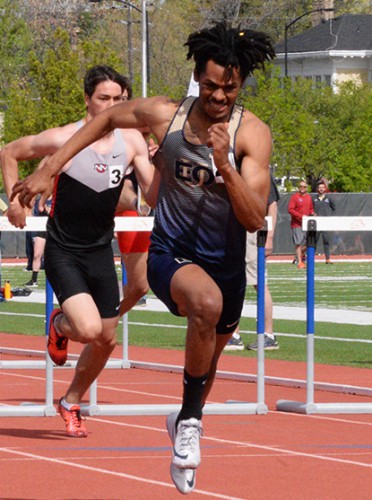 Matthew Kirkendall, four-time CCC Athlete of the Week, said he hopes his teammates will soon get to enjoy the benefits of a safe running surface on campus.

By hosting home meets and other activities, the university plans to attract new fans, athletes and guests to Union County, supporting local businesses and boosting economic development. Community Stadium’s updates will also open opportunities to host speakers, concerts and other community events without damaging the playing surface — an option Eastern Oregon has never had before.

The new playing surface can accommodate more events in a week than natural grass could sustain in a whole season. Youth through collegiate soccer and football teams, along with other sports at all levels, will have year-round access to the practice and competition venue.

“These upgrades are game-changing for EOU athletics and the community as a whole,” said Tim Seydel, vice-president for University Advancement. “The new track and turf promise improved performance on the field, increased attendance in the stands and more opportunities for engagement with the entire region.”

Donors and fans are invited to celebrate an official groundbreaking at 12:30 p.m., on May 5 between the Community Stadium and track, on G Avenue near Quinn Coliseum. The short ceremony will take place after the women’s alumni soccer game begins and before the Mountaineer football spring game kicks off.

To learn more about the Building Champions campaign or get involved, visit eou.edu/stadium-track or contact University Advancement at 541-962-3740.