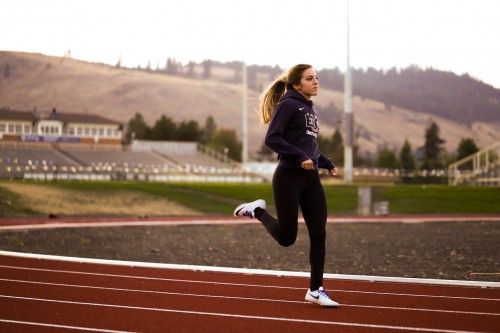 Head coach of track and cross-country Ben Welch will cut the ceremonial ribbon at 11 a.m. alongside Athletic Director Anji Weissenfluh and a selection of Mountaineer student-athletes.

“This Stadium and Track project has been in the works for years – at least since the time that our current track became unusable – and it is not an overstatement to say that it will be a game changer for us and for all of eastern Oregon,” Weissenfluh said.

Weissenfluh anticipates hosting youth and high school competitions, as well as community events on a collegiate-standard running surface. Alumni and community members who’ve donated to the Building Champions campaign will also be in attendance, with EOU President Tom Insko to mark the celebration.

“This continues the transformation of this side of campus – along with the new synthetic turf at Community Stadium and soon we will be adding a Fieldhouse,” Insko said. “We aim to make EOU a preferred destination in eastern Oregon for visitors, students and athletes.”

Executive Director of Philanthropy and the EOU Foundation Patrick Regan noted that an additional $650,000 is still needed to reach the campaign’s goal.

“Even though we are opening the track, we still need to get across the finish line in terms of our fundraising efforts for this campaign,” he said. “So we ask everyone to join us as we continue building champions at EOU.”

The ribbon-cutting ceremony begins at 11 a.m. on the EOU track, and is weather-dependent. In the case of snow, festivities will be cancelled.

For more information about the Building Champions campaign, visit eou.edu/stadium-track or call University Advancement at 541-962-3585.