The event is free and all are invited to attend. Copies of Doyle’s book will be available for purchase and signing following the reading, the final of the academic year presented by the Ars Poetica Lecture Series.

“Mink River” is Doyle’s debut novel, published in 2010 by Oregon State University Press. Molly Gloss, author of “The Hearts of Horses,” praises the book as being “absolutely in the tradition of Northwest literature, richly imagined, distinctive, beautiful.”

Library Journal magazine also gave “Mink River” a starred review, stating that those who are lovers of “classics like Sherwood Anderson’s ‘Winesburg, Ohio,’ or William Faulkner’s ‘As I Lay Dying,’ will find much to savor here.” 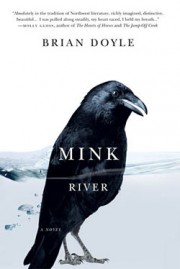 Doyle’s other works include “Grace Notes,” “Spirited Men,” “Credo,” “Epiphanies and Elegies” and “The Grail: A year ambling & shambling through an Oregon vineyard in pursuit of the best pinot noir wine in the whole wild world.”

The author’s essays have appeared in The Atlantic Monthly, Harper’s, Orion and The American Scholar and have also been selected for inclusion in “The Best American Essays.” He is currently the editor of Portland Magazine, a quarterly publication of the University of Portland ranked among the top 10 best university magazines in America annually and named number one in 2002.

Doyle also reviews books for The San Francisco Chronicle, The Oregonian and Preservation Magazine. He was the recipient of The American Scholar’s Best Essay Award in 2000 for his piece on Plutarch, two Pushcart Prizes, and an Award in Literature form the Academic Academy of Arts and Letters in 2008. He has been a finalist for the Oregon Book Award four times.