Eastern Oregon University > Events > Board of Trustees votes on tuition

Board of Trustees votes on tuition 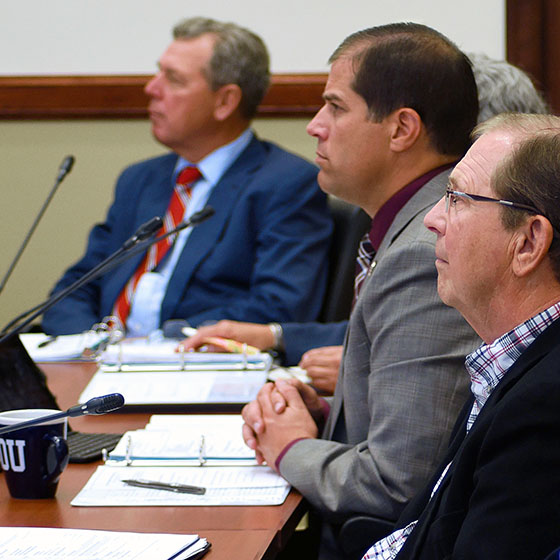 EOU file photo / Several conversations are on the docket of the next EOU Board of Trustees meeting that should influence future university direction and policy.

The board is voting on EOU’s proposed tuition rate and mandatory fees for 2017-18, as well as the university’s room and board rates for next year. Trustees are also considering a proposed statement of the university’s values and principles, a proposed increase to the university president’s compensation, proposed changes to various board policy statements, and the reappointment of the board’s chair and vice chair.

Several other conversations are on the docket that should influence future university direction and policy. At the invitation of the board, Ben Cannon, executive director of the Higher Education Coordinating Commission, will engage with trustees in a discussion of statewide higher education policy and strategy. They will also discuss development of the relationship between the board and the commission.

Jessi Gordon, a representative from Gallup Education, is joining the group to discuss research identifying institutional factors that lead to student success, and the board will talk about efforts to integrate these elements into university planning.

At the end of the day, Tim Seydel, vice president for University Advancement, will engage the board in planning for the current legislative session.

The meeting location is accessible to persons with disabilities. If special accommodations are needed, call 541-962-4101 or email htilicki@eou.edu at least 72 hours in advance.

The meeting will also be streamed at livestream.com/eou/governance.

« Fighting for funding in Salem | Inside the new issue of basalt »