Board of Trustees meeting summary 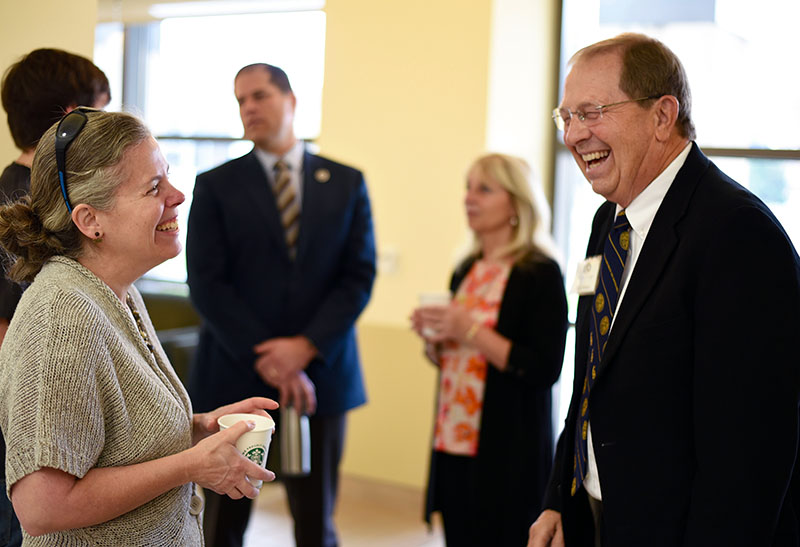 Photo by Laura Hancock / EOU board members began the day Thursday by visiting with faculty and students, including the university’s eight ASTEO Scholars, during a morning reception in Badgley Hall. David Nelson, right, board chair, talks with Nancy Knowles, professor of English and writing.

Opening announcements – Tom Insko, EOU president, welcomed Linda Reed-Jerofke, Nicole Almanza and Helen Moore to their first regular meeting as new trustees. He provided a brief summary of fourth week enrollment data, noting that on campus enrollment is up 4.5 percent with overall enrollment down 2.3 percent. A surge in the number of Pacific Island students – almost double from last year – and an increasing Latino student population as the result of refocused admission efforts were also highlighted.

Insko noted two new agreements with Klamath Community College and the Wallowa-Whitman Charter Ranger District. EOU’s partnership with KCC’s “Base to Bachelor’s” program presents “great opportunity to grow our online relationship with the military and support effective avenues for the military to receive their bachelor’s degree from EOU,” he said and is the result of much faculty collaboration. The Charter Ranger District will facilitate student internships and resources and is the “first step to bringing vitality to a center for rural advancement in the future,” Insko added.

Legislative update – Tim Seydel, vice president for University Advancement, shared more on the joint statement issued by the presidents of Oregon’s seven public universities regarding the failure of Measure 97. Next steps are being discussed across the state in light of the over $1 billion budget shortfall. The Council of Presidents is meeting with Governor Brown this week to share their institutions’ needs and learn about her priorities.

Action items – Motions were made and carried unanimously to affirm EOU’s current mission statement, the board’s statement No. 8 on board evaluations and approval of the university’s operating budget for fiscal year 2017. With one nay vote, the structural remodel of the academic affairs unit passed by a majority vote.

During review of the operating budget, Richard Chaves of Baker City, trustee and chair of the board’s finance and administration committee, said “Our fund balance is higher than it has been in many years, so if we can maintain and grow our education and general fund balance this year and implement some of the initiatives that will bear fruit in future years, I believe we are being good stewards of the funds.”

An in-depth discussion of the structural remodeling of academic affairs followed. Under the new model, three deans will oversee three colleges.

George Mendoza of Richland, Wash., trustee and chair of the board’s academic and student affairs committee, explained the objective is to reduce an administrative layer in the colleges, shorten the lengths in the chain of communication and add more “face time” with the deans, in addition to rebuilding opportunities within the colleges and other goals.

Strategic plan initiative – Holly Chason, director of institutional research, presented an overview of institutional planning and review of the strengths, weaknesses, opportunities and threats (SWOT) analysis conducted over the past month. From tactical to transitional planning, “EOU has reached a place of stability, enabling it to think longer term,” she said. “We have an opportunity right now, and we need to be moving toward systematic strategic planning for the institution.”

Title IX update – Chris Burford, board secretary and general counsel, and Colleen Dunne-Cascio, director of Student Relations and Title IX coordinator, shared information on the processes in place that provide fair resolutions to issues involving safety and protection of students.

“There are opportunities for all of us to engage in providing safe spaces for students, faculty and staff to bring forward issues that need to be addressed,” Dunne-Cascio said. “It’s about developing best practices for our university community with the objective of giving power back to the victim.”

Prevention and education programming occurs before the start of fall term during Week of Welcome and numerous community resources are utilized throughout the year, among many other efforts. More information on EOU’s program is available at www.eou.edu/TitleIX.

Closing remarks – The next full board meeting is January 19, with a meeting to set tuition scheduled in April.

For related documents and access to the archived live stream of the meeting visit eou.edu/governance and click “Board Meeting Schedule.”