First EOU Board of Trustees meeting

EOU Board of Trustees to convene for first meeting, Feb. 11-12 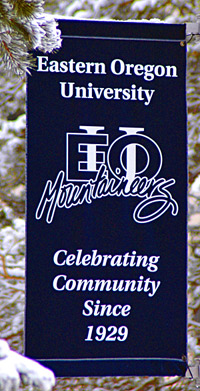 LA GRANDE, Ore. (EOU) – Eastern Oregon University will take an important step toward greater local control when its Board of Trustees assembles for the first time, Feb. 11-12.

The 14 trustees – appointed by Governor Kitzhaber and confirmed by the Oregon Senate in September and December – all either hail from eastern Oregon or have direct ties to the region.

The first part of their gathering will be a training and orientation session, where they will learn more about their roles and responsibilities as a governing body. The orientation runs from 1-5 p.m. Wednesday and 8:30-11 a.m. Thursday.

The first official board meeting starts at 11 a.m. Thursday and concludes at 3 p.m. Action items will include adopting bylaws and designating members of various committees in preparation for the board assuming full leadership of the university in July.

The board will hear reports from representatives of EOU’s Faculty Senate, University Council and Associated Students of EOU, as well as Interim President Jay Kenton and Vice President for University Advancement Tim Seydel. An update on the search for a new university president will also be given.

Both the orientation and board meeting are open to the public and will be held in the Dixie Lund Boardroom in Inlow Hall 201. A live stream will also be available at https://new.livestream.com/eou/governance.

“This is an important milestone in EOU’s history,” said David Nelson of Pendleton, a former state senator and the likely nominee to be board chair. “The formation of an independent board will give the people of eastern Oregon a greater voice in the direction of their university.”

For more information about the EOU Board of Trustees visit www.eou.edu/governance.