Board of Trustees meeting summary

Photos by Laura Hancock / The 14 members of EOU’s new governing board take a vote during their first public meeting held last week. 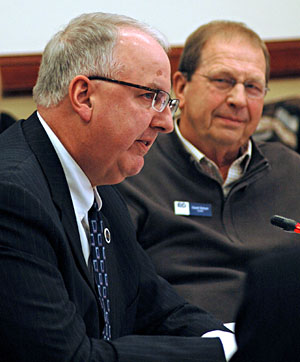 LA GRANDE, Ore. (EOU) – Eastern Oregon University’s Board of Trustees met Thursday, Feb. 12 to review and adopt its bylaws, confirm officers and designate committee members. The inaugural public meeting was held during two days of focused training and orientation for the 14 new board members.

Reports – Representatives from the university’s shared governing bodies provided reports to the board, as did Jay Kenton, interim EOU president.

John Knudson-Martin, associate professor of education, provided an overview of the Faculty Senate, and Carol Franks, project coordinator for Facility Operations, reviewed the history and structure of University Council. Both conveyed a sense of enthusiasm to begin working with the board to build EOU’s future.

Philip Sebastiani, president of the Associated Students of EOU, gave an update on student government activities. In closing he urged the board to consider the students when making decisions that impact the university. “We are the biggest stakeholders here,” he said.

In his report, Kenton emphasized the meeting as a historic event for the university.

“As trustees, you will fill a critical void in the leadership of the institution at an important juncture in its history and the future of this region,” Kenton said. “What a wonderful opportunity for a great group of people. Thank you for agreeing to serve on this board. I guarantee your work will be meaningful and much appreciated by those within the institution, as well as those who seek its services.”

The complete transcript of Kenton’s address will be available at www.eou.edu/governance.

Consideration of proposed bylaws – After some discussion, a motion was made and passed to adopt the proposed bylaws on a provisional basis for six months. The board took similar action on various subsidiary documents to the bylaws, including rules for conducting public meetings, delegation of authority and board committees. A statement on attendance and performance of official business was adopted outright.

A technical amendment will be made within the next six months to include a statement addressing the role of shared governance. Chris Burford, general counsel and board secretary, said other documents are being reviewed and tailored to meet EOU’s specific needs.

Clarification was also given regarding the university president’s role on the board, and it was confirmed the president is a non-voting member as required by state law.

Board officers and committee nominations – The following individuals were nominated and confirmed to serve as board officers: David Nelson, board chair; and Roberta Conner, board vice chair.

Board conditions update – Trustees received a summary of the update Kenton gave to the State Board of Higher Education Jan. 9 addressing EOU’s special initiatives including high school and Latino outreach, new career center, website upgrades, rebuilding of on-campus enrollment and implementation of the university’s sustainability plan and financial projections.

Tim Seydel, vice president for University Advancement, gave a legislative update, and David Nelson shared the status of the EOU presidential search. Nelson, who also chairs the search committee, said they expect to interview finalists for the position in late April.

Dates for the board’s quarterly meetings were also discussed, with recommendations made for April, June, October and January.

“We have an incredible opportunity, I believe, and one thing I’d like to challenge you with is to come up with some new ideas,” Nelson said, addressing the trustees at the conclusion of the meeting. “Let’s take it as far as we possibly can.”

The meeting agenda, related documents and archived live stream are available at www.eou.edu/governance.