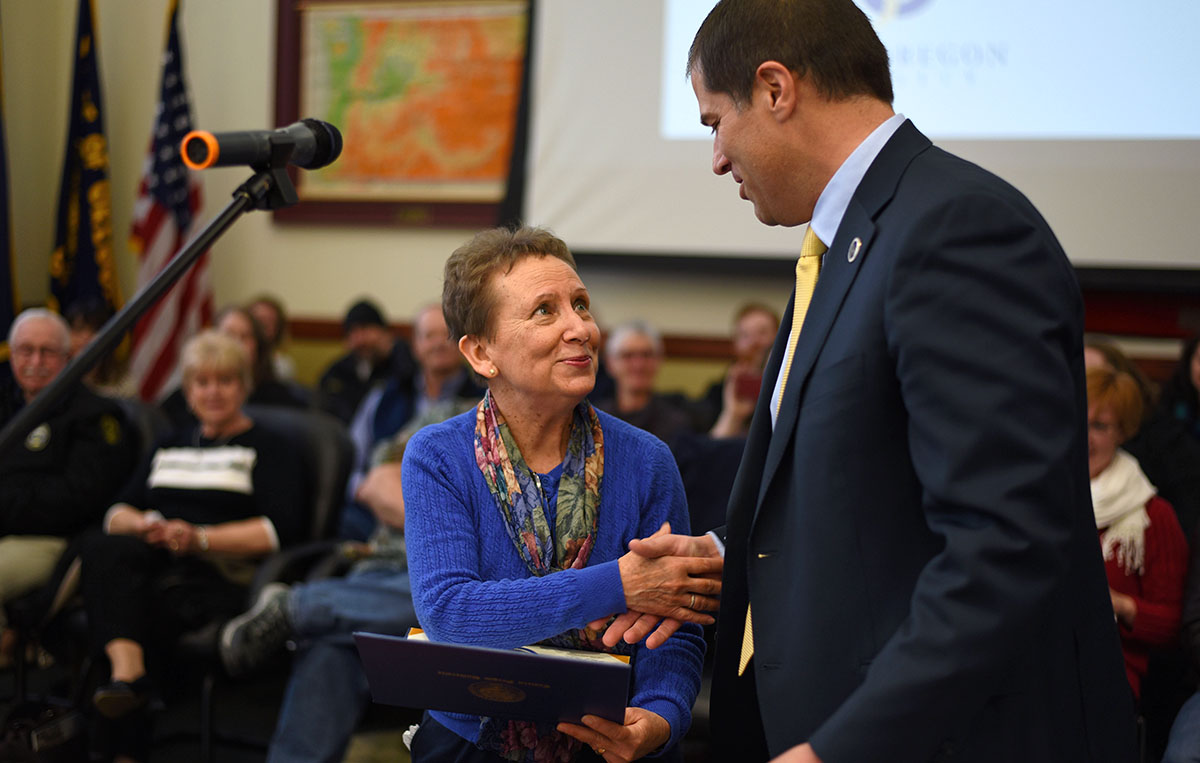 Photo by Laura Hancock / Thursday’s board meeting included a special honorary posthumous degree presentation for Ronn Witcraft, EOU’s 2015 Outstanding Student of Communication Studies. Witcraft passed away in September shortly before completing his bachelor’s of science in media arts and communication with a minor in business. President Tom Insko presented the diploma to Ronn’s wife, Ellen Witcraft.

EOU board focuses on finance during January 21 meeting

Opening announcements included a welcome from EOU President Tom Insko. He began by informing the board of his acceptance of an invitation from Governor Kate Brown to serve another four-year term on the Oregon Board of Forestry with the final senate confirmation forthcoming.

President Insko also reported that the university is seeing progress in retention with 97 percent of first time freshmen persisting from fall to winter term, and congratulated the EOU team on efforts in this area. He recapped the announcement of a wrestling program for women and men that will begin in fall 2016 with the help of philanthropic support.

Changes in Human Resources were discussed next, including the departure of Cheryl Martin as director and appointment of Colleen Dunne-Cascio as interim director, followed by a brief update on the provost search, which closes January 31. The board was also briefed on the process for upcoming faculty contract negotiations to be led by Brian Caufield, director of labor relations with the University Shared Services Enterprise.

Faculty Representative and Assistant Professor of Education Ray Brown shared details on an opportunity to bring 50-60 Chinese students to EOU this summer on exchange.

Board Chair David Nelson set the tone for the meeting by identifying finance as the main focus before opening the floor to President Insko and Vice President for Finance and Administration Lara Moore to give a budget and financial update.

Trustees received a high-level overview of both short and long-term work being done on a new financial model to help prepare for the board retreat in August when they will begin strategizing EOU’s future.

“At the end of the day, we’re all here for basically the same reasons: making EOU great and serving students like no other institution can,” he said. “Everything that we do in the background is around changing how we work together. It may look really easy, but most organizations fail at it, and I’m committed to making sure we don’t fail going forward.”

President Insko outlined his two-tiered approach to build a foundation for success and develop a long-term strategy. He also asked for the trustees’ help in collectively identifying what makes EOU unique and distinctive.

The discussion then shifted to a funding model, which will be used to examine new ideas and existing programs to forecast revenue on a more complex level. Vice President Moore explained how EOU worked with a consultant to “pair down” a model provided by the Higher Education Coordinating Committee (HECC), tailoring it to fit the university’s needs.

“I fully see this model developing over time,” President Insko said. “One of the things I want Lara and the finance team to do is begin to see where the biggest triggers are for financial impact…we have a lot of opportunity here that I’m excited about.”

Academic program assessment and guidance tools are also being developed to help inform allocation of resources, time and attention. An “accountability” dashboard will provide metrics on how EOU is performing relative to its long-term strategy and mission. President Insko added that charter teams are being assembled to pursue outcomes including increased enrollment, retention and completion rates with specific goals set for fall 2017.

Consent agenda items were approved next, including the October 22 meeting minutes and the trustee nominations and recruitment process. A resolution authorizing the president to reply to any HECC requests for proposals without further board approval passed with an addendum to notify the board of any action taken on said proposals.

Reports were then given from representatives of EOU’s Faculty Senate, University Council and ASEOU student government, followed by individual board committee reports.

After breaking for lunch, a special honorary posthumous degree was presented to Ellen Witcraft, widow of the late Ronn Witcraft. Witcraft was EOU’s 2015 Outstanding Student of Communication Studies. He passed away in September, shortly before completing his degree.

Friends and faculty joined the Witcraft family in recognizing Ronn’s efforts toward a bachelor’s of science in media arts and communication with a minor in business.

“Thank you to everyone who worked to award Ronn Witcraft his baccalaureate degree,” said EOU Trustee and personal friend Dixie Lund. “I know it would mean the world to him, as it does his wife Ellen and the family.”

“Mr. Witcraft left a lasting impression on the students, faculty and staff at Eastern Oregon University,” President Insko said. “We are proud to call him an alumnus.”

Following a review of the board website was another special presentation from MBA candidate Dana Kurtz on her master’s project; a feasibility study and concept plan to build a multi-modal trail along the Joseph Branch Railroad. The Rail with Trail project is currently under review by the Wallowa Union Railroad Authority.

“We don’t know the outcome of WURA’s review yet, but I wanted to share how beneficial these projects are for the university to engage in,” Kurtz added.

Three other EOU students assisted on the project through paid internships funded by a grant from Cycle Oregon. Faculty, staff and community members also contributed.

Later in the afternoon, Vice President Moore presented a second quarter management report showing that the education and general fund – EOU’s primary operating budget – is forecasted to increase, resulting in a fund balance of 8.2 percent of projected revenue.

The report showed auxiliary services units are performing as expected, given some variances in outsourcing EOU Bookstore’s operations to Barnes & Noble and athletic expenses shifting to the education and general fund. Designated operations are also trending as expected, with a 33 percent increase in sales and services over last year due to athletics receiving a $45,000 game guarantee. Variances in personnel costs as a result of upcoming faculty contract negotiations will be encapsulated in fiscal year 2017.

“In summary, second quarter results for all funds indicate we’re trending to be inline with our initial budget projections,” Vice President Moore said.

The board then received a legislative update from Vice President for University Advancement Tim Seydel, who indicated ongoing activities include universities working together and autonomously as needed to accomplish goals.

Vice President Seydel and Chair Nelson participated in legislative days in Salem earlier this month, providing testimony and meeting with legislators. Vice President Seydel noted that university lobby day is coming up February 11, and EOU aims to have a large group represented.

In conclusion, enrollment, recruitment and retention were recommended as action items for the next regular public board meeting scheduled for Thursday, April 21. Campus emergency procedures will also be discussed. A special meeting may be convened in March to discuss the university’s capital budget and operating budget requests to the HECC.

For the agenda, related documents and an archived live stream of the board meeting, go to www.eou.edu/governance.