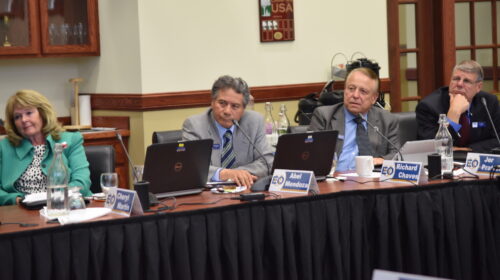 Feb. 21, 2020 LA GRANDE, Ore. –  At their regular winter meeting, the Eastern Oregon University Board of Trustees spent time working in small groups to walk through progress on the university’s strategic plan, as reflected in the institution’s annual report.

Data points in a variety of areas highlighted considerable progress, as well as room for growth. Over the past year, 61% of EOU students participated in civic, service or co-curricular activities, and 94% completed some type of internship, practicum or research project last year. Additionally, 89% of alumni said the university prepared them to achieve their long-term goals.

Holly Chason, the Associate Vice President for Enrollment Management and Institutional Effectiveness, pointed to new initiatives, such as Mountaineer Success Teams, behind the university’s increase to 72% retention of first-year freshmen. The program pairs students with faculty and staff who connect with them to build connections and help resolve problems or challenges.

Chason also highlighted EOU’s expanding relevance and interconnection to the region it serves. She reported that 63% of undergraduates from Oregon come from rural high schools, and that rate is even higher, at 87%, among the freshman class.

Designated as “Oregon’s Rural University” by the State legislature two years ago, EOU has furthered its identity as a cultural and economic engine by establishing the Rural Engagement and Vitality (REV) Center. The REV Center recently hired its first full-time employee and has taken charge of a number of projects, including a role in developing the university’s new Sustainable Rural Systems degree.

“We’re doing well and this is an important conversation,” Trustee Jer Pratton said. “We need to decide what we’re going to focus on, and make sure that these goals are part of our agendas every time we meet.”

Following a brief executive session to discuss progress on the university’s bargaining process with faculty, the board approved the quarterly financial report.

Trustees approved the Administration and Finance Committee’s recommendation that plans to construct new residence halls be postponed until spring 2023. Chair of the committee Richard Chaves said enrollment trends don’t suggest the new space will be needed before then, and further assessment of the type and style of housing can be conducted in the meantime.

Over the past several months, Dean of the College of Education Matt Seimears has developed an Educator Equity Plan, required of all public universities by March 2020. The plans were initiated by HB 3375, a part of the Student Success Act that aims to support members of underrepresented groups who seek to become teachers. Seimears reported to the Board that the plan for EOU involves expanding the Oregon Teacher Pathway Program and developing new summer academies in partnership with regional school districts. Trustee Pratton praised Seimears’ plan and its ahead-of-schedule completion.

The Ad Hoc Committee for Presidential Compensation presented its findings, after several months of public meetings and input. Trustees approved the proposal to use a three-pronged approach that sets a base salary founded on industry standards, plus potential awards for goal attainment and meritorious achievement.

Based on 2018-19 performance, the board approved a 2.75% increase of the president’s base salary, as well as a one-time meritorious achievement award of $5,007. Trustee Pratton served on the committee and said he was happy with its work.

“Our conversations were very thought-provoking and I’m pleased with the outcome,” he said. “We’ve set the general parameters for the Chair, and encouraged that he work with members of the standing committees to complete the annual evaluations.”

Later, trustees responded to a legislative update from Tim Seydel, Vice President for University Advancement, regarding the current short session that ends March 8. EOU students traveled to Salem last week and lobbied for support of higher education at University Day and brought the largest contingent of any university.

Meeting materials and complete minutes are available at eou.edu/governance.