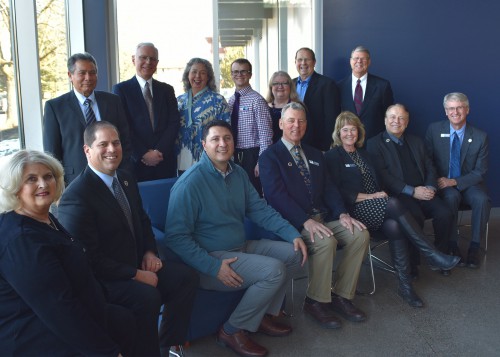 Jan. 31, 2019 LA GRANDE, Ore. –  Eastern Oregon University’s Board reviewed the institution’s strategic plan, The Ascent, and discussed ongoing monitoring of progress during a special work session on Wednesday as part of their winter meeting. Trustees convened for discussion and dialogue around key metrics, the frequency of reports and other data points to monitor regarding the school’s long-term plans.

EOU’s 2018 Annual Report provided updates and stories on progress towards its strategic goals. President Tom Insko said he is encouraged by success in action areas where the institution focused its resources during the past year, such as on-campus enrollment, student retention, and building a more culturally and ethnically diverse student body. The plan continues to serve as a key guiding framework for the board.

“Our strategic plan determines how we allocate resources — dollars, staff, communications and so forth,” Trustee Bill Johnson said.

The allocation of state resources came up early as part of Thursday’s regular meeting agenda, with a presentation from Ben Cannon, Executive Director of the state’s Higher Education Coordinating Commission (HECC). He noted the Governor’s Recommended Budget (GRB) and its challenges for public universities.

Oregon’s seven public universities face the prospect of funding cuts and tuition hikes as they work to manage a flat budget in the Governor’s plan. With many fixed costs in place for the universities, leaders estimate it would take $120 million in new funding to maintain tuition levels at or below 5 percent.

“There is nothing about our landscape that suggests higher education is likely to receive significant financial resources in the near future,” Cannon said. “We have an opportunity and a need to come together as institutions and make it clear to lawmakers that we can change the state of Oregon through education.”

Insko said he sees potential for collaboration and heightened efficiency, despite the outlook.

“It’s not all dire,” he said. “The Governor’s office and Legislature understand our challenges, but ultimately we will have to make decisions with some risk involved.”

Insko said he hopes EOU can avoid major tuition increases and reasserted his commitment to improving efficiencies elsewhere in the organization first.

“We will put all of our resources toward tuition mitigation if the state approves anything less than the $120 million allocation,” said Vice President for University Advancement Tim Seydel.

Retention and graduation rates also play an important role in determining state dollars, and Vice President for Student Affairs, Lacy Karpilo reported that retention among first-time freshmen is at 68 percent, and the highest on record among transfer students at 74 percent. She also highlighted the Mountaineer Success Team, a pilot program that connects students with faculty and staff mentors for one-on-one engagement and coaching support.

In other business, the board approved a new accounting major, amended its statement regarding presidential evaluation, heard a student marketing presentation and received an update on EOU’s work evaluating potential online program management partnerships. This fall, a cross-functional group of faculty and staff assessed how partnering could help EOU meet its enrollment goals to assist with marketing, recruitment and retention of online students in an effort to reach 5,000 full-time-equivalent enrollment by 2029. Following research, interviews and formal campus visits, the committee recommended further evaluation of a partnership with Learning House.