Building a biosensor: teacher, student from Irrigon team up with EOU professor on new research to protect Oregon’s salmon 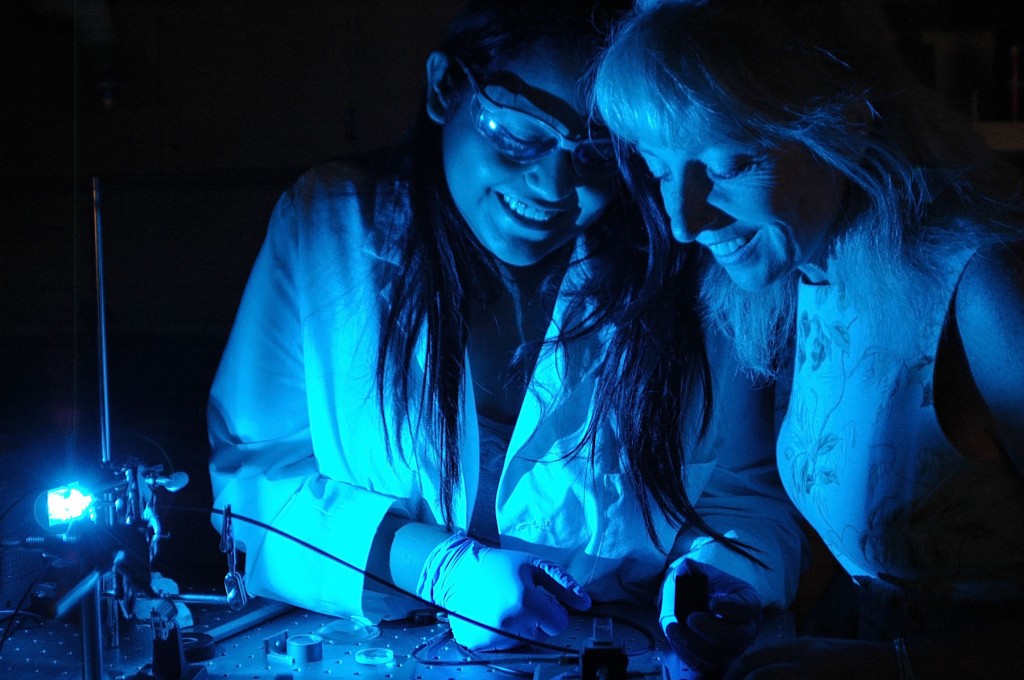 Jessica Nava, left, is spending the last summer before she graduates from high school assisting with research at EOU. Anna Cavinato, professor of chemistry, is her mentor.

August 2, 2013
LA GRANDE, Ore. (EOU) – Is it possible for a biosensor to impact the health of an entire species? Research being done at Eastern Oregon University indicates the answer is yes.

Anna Cavinato, professor of chemistry, is leading the first phase of a grant-funded study to identify small strands of DNA that will help create such a tool.

Once developed and deployed, Cavinato said the biosensor could increase the odds of early detection and hasten response to prevent the spread of a chronic infection that is adversely affecting Oregon’s salmon populations: bacterial kidney disease (BKD).

“Our location, connection to the Oregon Department of Fish and Wildlife and relevance of the disease are all reasons I chose to focus my research on the issue,” Cavinato explained. “The biosensor would provide an alternate method of detecting BKD that is rapid, portable and highly useful in the field.”

For example, using the biosensor to monitor incoming and effluent water in hatcheries could help assess and manage infection risk. Testing the tank or raceway water could also prove useful for anticipating epidemics of BKD, allowing treatment to be implemented prior to peak disease manifestation.

“Treating before an epidemic peaks can reduce overall mortality and shorten the duration of the outbreak,” Cavinato said. “It can also allow for better utilization of antibiotic treatment.”

Tim Hoffnagle, a biologist with ODFW’s Fish Research Office at EOU, agrees the sensor would be useful for early detection of disease and has potential to benefit the environment in other ways, too.

“Earlier treatment may help reduce the amount of antibiotics used, which means less would be released into the water,” he said.

Erythromycin is administered to fish in their food as a preventative measure. Hoffnagle said trace amounts of the medicine dissolve in water through uneaten food and waste matter.

As soon as Cavinato is ready, she and Hoffnagle may have the opportunity to begin testing the biosensor and another detection technique. Until then, fish culturists will continue to rely on increased mortality to signal infection and necropsy to positively identify the disease.

“We’ve seen big die-offs at Lookingglass Hatchery in the past,” Hoffnagle said, “but BKD is the most common, problem disease in juvenile salmon everywhere.” 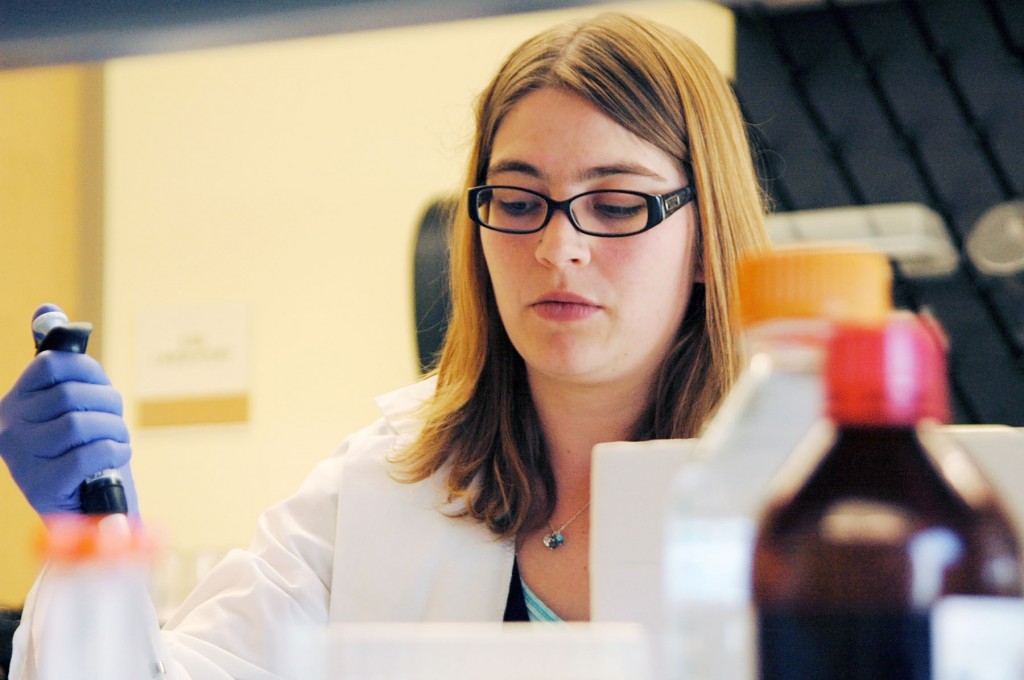 A $7,500 grant from Partners in Science is making it possible for high school teacher Molly Blatz to participate in biosensor research at EOU and bring back new knowledge to her students in Irrigon, Ore.

Molly Blatz, a science teacher at Irrigon High School, is teaming up with Cavinato to conduct the experimentation necessary for the concept to leave the research stage and reach the development phase, when Cavinato’s colleagues at Pacific Northwest National Labs will guide the actual production of the biosensor.

A Partners in Science grant is what brought Cavinato and Blatz together on the project. The $7,500 award from the M.J. Murdock Charitable Trust will fund their research for the next two summers. It also provides professional development for Blatz, like presenting findings at regional and national conferences.

But what Blatz is anticipating the most is the opportunity to share discoveries with her eager students back in Irrigon.

“This program is fabulous for high school teachers interested in conducting research,” she said. ”The molecular biology aspects will prove very applicable in the classroom. My students will love the opportunity to practice the techniques we’re using, and they’ll understand the big picture of how bacteria can infect and affect an organism.”

Some of the techniques Blatz will incorporate into her lesson plans require the use of high-tech equipment – equipment she has ready access to at EOU, but not necessarily in her classroom.

Partners in Science offers a solution. In year two of the grant, Blatz will be eligible to apply for a supplemental award of up to $7,000 to fund the purchase of new technology for her school, including instruments to conduct gel electrophoresis and polymerase chain reaction.

These processes amplify small pieces of DNA, replicate them and enable Blatz and Cavinato to visualize and separate the fragments in an attempt to identify specific DNA strand sequences.

These sequences will be eventually tested for their ability to bind to a surface protein used as a biomarker to identify presence of the bacterium in water. Strands that bind strongly to the biomarker will be linked to gold nano-particles and used to fabricate the sensor. The nano-particles will react to the bacteria’s protein and change color if the results are positive, providing an immediate visual interpretation.

Interns often assist with this type of ongoing research at EOU, and Jessica Nava is learning a lot while filling a vital role. Nava, who begins her senior year at Irrigon High School in the fall, is participating in an eight-week program funded by Project SEED, the Richland Section of the American Chemical Society and the national ACS office.

Knowing Blatz first as a teacher and now working alongside her with Cavinato as their dual mentor is a fun experience, Nava said. It was Blatz who also first encouraged Nava to apply for the internship.

“I’m interested in all areas of science,” Nava said. “I like helping with gel electrophoresis, mixing chemicals and using equipment I’ve never seen before.”

As it turns out, Nava knows a lot about the spectrofluorometer, a device that measures the emission by fluorescent labeled DNA used in the study.

“Jessica helped build an improvised version of the instrument combining a spectrometer with an LED and fiber optics,” Cavinato said. “She’s our resident expert!”

Nava’s plans after high school include attending Oregon State University, where Blatz completed both her undergraduate and master’s degrees.

Thanks to programs like Project SEED, Nava is gaining exposure to college life while being immersed in a professional environment. She is staying on campus in EOU’s residence halls, has a roommate and makes weekend trips home to Morrow County to see her family.

“I’m definitely learning a lot I can use later on,” Nava said, “and it helps me know what it will be like to live on my own.”

Also assisting in the lab is Logan Loennig, a senior biochemistry student at EOU from North Powder. He is Cavinato’s dedicated intern for the summer and has spent previous years conducting research with other faculty at the university.

With his sights set on medical school and training as an emergency room physician, Loennig’s participation in hands-on scientific investigation at the undergraduate level is laying the groundwork for greatness. He will join fellow EOU students at the American Chemical Society’s national meeting next year and present his portion of the biosensor research to a panel of scientists and peers.

EOU is the only institution in eastern Oregon currently participating in Partners in Science and Project SEED.