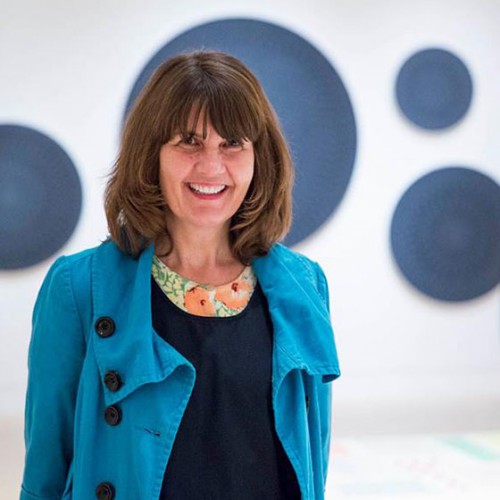 Grabner’s curatorial work has been increasingly motivated by localism and the extant narratives therein: how it indicates or defies provincialism, how it relates to or helps shape the broader contemporary scene and how “decentralization” is changing the landscape of art-making nationally.

“Michelle has a lot of experience and insight into both the creators and institutional engines of contemporary culture,” said Susan Murrell, associate professor of art at EOU. “Her interest and focus on the topics of community and regionalism is of special significance to artists like myself who choose to live outside of urban centers.”

“The EOU art department is excited for the opportunity to have our students and wider community engage in a candid conversation with her,” Murrell added. “She is an important professional in the art world.”

Her current solo exhibition is on display through November at the Indianapolis Museum of Art. Other solo exhibitions of Grabner’s work have been held at INOVA, The University of Wisconsin, Milwaukee, Ulrich Museum, Wichita, and University Galleries, Illinois State University.

Grabner joined the faculty of the School of the Art Institute of Chicago in 1996 and became chair of its prestigious painting and drawing department in 2009. From 2012-2014, she was a senior critic at Yale University in the painting and printmaking department. Her writing has been published in Artforum, Modern Painters, Frieze, Art Press and Art-Agenda, among others.

“I am honored to be the curatorial steward for the Portland 2016 Biennial, and will look to give prominence to the ideas of localism by gathering a collection of strong and engaging artwork from studios throughout the state of Oregon,” Grabner said.

Learn more about Grabner’s multi-faceted background and career, and how her interest in regionalism led her to become the Portland 2016 Biennial curator during her interactive lecture.

Grabner’s current solo exhibition, “Weaving Life into Art,” is on display through November at the Indianapolis Museum of Art.