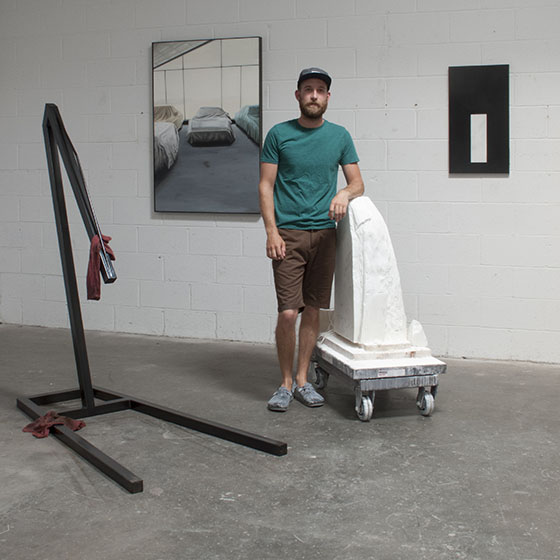 Farrand, who graduated from EOU with a bachelor of science in art in 2009, was featured in the Frieze New York art fair, a prestigious feat on its own.

During the fair, however, Farrand got an even greater honor: The New York Times named him as one of “Seven Young Artists Not to Miss at Frieze.”

“The fair was going really well, and I was super pumped to be there,” Farrand said. “Then the article was just kind of icing on top.”

“It’s a huge art fair with well known, established artists. It made me feel really honored.”

The Times noted Farrand’s use of juxtaposition in his work. “Shop Rag” (see below) for example, depicts a steel pegboard holding a hand-carved Carrera marble handkerchief.

Farrand said most of his work is material-based.

“I kind of work with whatever makes sense with the idea,” he said.

He also pulls from a variety of experiences — construction work, building guitars and working on cars — often creating art out of practical materials recognizable to people across socioeconomic classes.

Los Angeles-based Farrand teamed up with Ibid Gallery early this year after the gallery, which is based in London, opened a location in L.A. He was part of Ibid’s January Open House and a fair in Hong Kong in March before Frieze in May.

“Frieze is where big galleries meet. It’s one of the biggest fairs that’s put on,” he said. “It’s pretty exciting to be working in the context of that fair because there are a lot of fairs, but they’re not all as good.”

Farrand, who went on to earn a master of fine arts from Cranbook Academy of Art after graduating from Eastern, is staying busy after Frieze.

“I’ve definitely been much busier — lots of studio visits,” he said.

Farrand is part of Ibid Gallery’s Holiday Summer Group Show, which features such names as Henri Matisse and Alberto Giacometti.

“It’s a really cool exhibition to be in,” he said.

In the longer term, Farrand is currently in the studio preparing for a yet untitled solo show in September in L.A.

With a CV growing quickly, Farrand looks back on his time at EOU fondly.

“Going to school in a small town, you don’t have the same sort of outside pressures to follow mainstream stuff,” he said.

Farrand also praised the art faculty for their attention and commitment to students.

“Having so many people to learn from that were also practicing artists, it was nice,” he said. “If you showed that you cared, they cared too. It doesn’t really happen like that elsewhere.”

Cory Peeke, a professor of art at EOU who keeps up with Farrand on social media, said he was excited to learn Farrand was featured at Frieze and mentioned by The New York Times.

“Just the fact that he is exhibiting his work in such prestigious art fairs as Frieze and other venues around the globe speaks volumes about both the work and the drive of the man making it, and perhaps even a little to the education he received here,” Peeke said.

Peeke first met Farrand in the fall of 2005 in his Art 101 class, before Farrand became an art major. He recalled a vocal student with an inquisitive nature and extraordinary work ethic.

“He questioned everything and was initially often frustrated by the fact that there were no black and white answers that I could give him,” Peeke said. “It took him a while to come around to the realization that art is an exploration of ideas, not a series of facts or incontestable theories to be memorized.”

Farrand’s recent successes, the professor said, are an affirmation of the department’s work.

“I think the foundation he and many others have obtained at EOU gave them a strong base on which to build careers in the visual arts, as well as meaningful lives,” he said. “I believe what I most want art students to understand is that if you want it, you have to work for it. Nothing is going to be given to you.”

Farrand, he said, is an example of an alumnus who has done that with great resolve. Since his graduation, Farrand has been featured in a couple of alumni exhibitions at EOU’s Nightingale Gallery, most recently in the 2015 “Homecoming” exhibition last October.

Peeke said faculty try to keep up with their former students and their accomplishments.

“I am constantly amazed at what our alumni are doing out in the world and we always look for ways to share their successes with the EOU community,” he said.