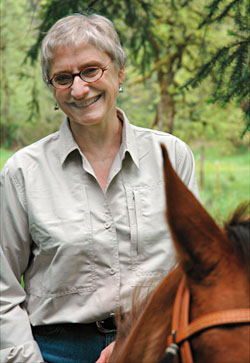 LA GRANDE, Ore. – (EOU) – Visiting writer Molly Gloss will read from a sequel to her recent award-winning book “The Hearts of Horses” for the next Ars Poetica Lecture Series at EOU.

The reading is this Thursday at 7:30 p.m. in the Pierce Library Reference Room and is free and open to the public. A book signing will follow.

“The Hearts of Horses” is a novel about a young woman breaking horses for several ranchers in Eastern Oregon in the winter of 1917. Author Jane Kirkpatrick calls the Oregon Book Award finalist “one of the best books you’ll ever read.”

Gloss has garnered other prizes including the PEN Center West Fiction Prize for her book “The Dazzle of Day,” as well as the Pacific Northwest Booksellers and the Oregon Book awards for her novel “Jump Off Creek.”

After spending her childhood in rural Oregon, Gloss began writing seriously when she became a mother. Since, she has been a particular favorite of Northwestern readers and currently lives in Portland.

Gloss has taught writing and literature of the American West at Portland State University, and served as visiting professor at Pacific University’s master of fine arts in writing program.