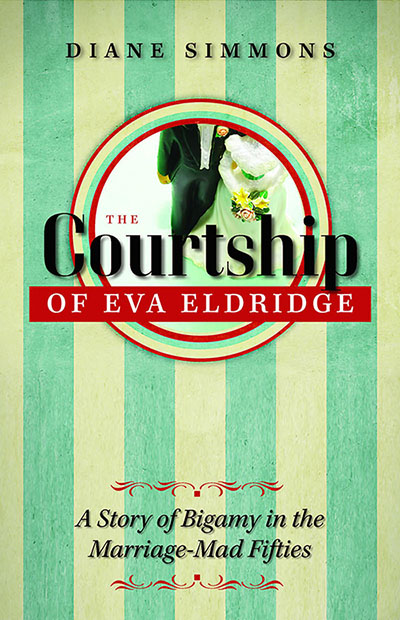 “The Courtship of Eva Eldridge” by Diane Simmons is a true post-World War II story about the life of a young woman from rural Oregon. Meet the author January 17 at EOU.

Simmons will share selections from her new book, “The Courtship of Eva Eldridge,” at 7:30 p.m. in the Pierce Library Reading Room on campus. The reading is free and open to the public.

David Axelrod, Ars Poetica director and professor of English at EOU, encourages the community to attend to learn more about this true story about a woman from Huntington, Ore.

“If there is one literary event this year that speaks to interest in the history of women in farming communities in rural eastern Oregon, this reading is for you,” Axelrod said.

Simmons’ book draws on a trove of some eight hundred letters and papers about Eldridge, who like others of her generation, grew up pretty and popular in rural Oregon and was expected to marry young and live a life much like that of her parents: farming and rearing children. But when the United States entered World War II and men headed to battle, the government started recruiting women to work in their stead.

Eldridge and many other young women found that life in the city with plenty of money, personal freedom, and soldiers and sailors eager to pay court, was more exhilarating than living on the farm. Her remarkable life illuminates women’s struggle for happiness at a time when marriage – and the perfect husband – meant everything.

The New Yorker singles out Simmons’ narrative of Eldridge’s life for tracing “one woman’s story through hundreds of wartime letters and papers, ultimately uncovering postwar America’s rampant bigamy and the women who overcame it.”

Fellow author Peter Chilson praises Simmons, too, stating that her writing “is vivid and tight, with a touch of American noir reminiscent of Raymond Chandler and Joan Didion. Simmons’ writing brings to life the dark side of a country trying to move on in the wake of war. She blends history and her own detective work to tell a story of betrayal and shattered dreams.”

Simmons grew up on a farm in southeastern Oregon and completed her undergraduate degree in history from the University of Oregon. She began her writing career as a journalist in Idaho and her first investigative piece involved a ponzi schemer in a mink tie and rattlesnake boots. She has also worked for newspapers in Alaska and Washington, and is the author of two highly regarded novels and an award-winning collection of short-fiction.

Her novel “Dreams Like Thunder” set on a farm in eastern Oregon at the end of the frontier, won the Oregon Book Award. Her short stories have appeared in Northwest Review, Missouri Review, Beloit Fiction Journal, Drunken Boat and elsewhere.

Copies of “The Courtship of Eva Eldridge” will be available to purchase at the reading. Learn more about the author at www.dianesimmons.net.