The reading begins at 7:30 p.m. in Huber Auditorium in Badgley Hall and is free and open to the public. 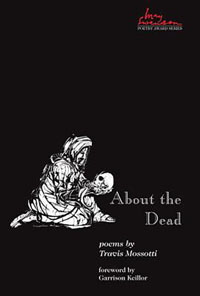 "About the Dead" by Travis Mossotti

Mossotti is the recipient of the 2011 May Swenson Award from Utah State University for his first full-length collection, “About the Dead,” with Garrison Keillor serving as judge.

“Reading (‘About the Dead’) was like following the poet up a steep climb on a rocky slope as he improvised his route, and at every step I was struck by the rightness of his choices, surprised by so many odd words that seemed so exactly right,” Keillor wrote of the collection.

In addition, the author was awarded the James Hearst Poetry Prize from the North American Review in 2009, and “Decampment,” the opening poem to “About the Dead,” was adapted to screen in 2010 as an animated short film (www.decampment.com).

Mossotti received a bachelor of arts in English and French from Webster University and a master of fine arts in poetry from Southern Illinois University-Carbondale. He currently resides in St. Louis with his wife, Regina. 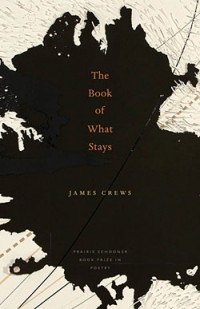 "The Book of What Stays" by James Crews

Crews, formerly of La Grande and EOU, is the recipient of the 2011 Prairie Schooner Prize in Poetry for his first collection, “The Book of What Stays.”

David Clewell, in his praises for “The Book of What Stays” writes, “Crews’s aptly titled debut collection has staying power galore. In his lyrical, pitch-perfect renditions of regret and loss, this poet bears exacting witness to the parallel world of acceptance and renewal animated everywhere by the dizzying physics of human grace under pressure.”

Crews’ chapbook, “What Has Not Yet Left,” won the 2009 Copperdome Prize from Southeast Missouri State University. He is the author of two other chapbooks as well: “Bending the Knot” (Gertrude Press Chapbook Prize), and “One Hundred Small Yellow Envelopes: A Poem After the Life and Work of Felix Gonzalez-Torres” (Parallel Press).

His poems have appeared in “Best New Poets” 2006 and 2009, “basalt,” “Columbia,” “Prairie Schooner,” “Court Green,” “Crab Orchard Review” and other journals. In 2009, Crews was the recipient of the Bernice Slote Emerging Writers Award from “Prairie Schooner,” and in 2010 he was a writer-in-residence at the Kimmel Harding Nelson Center for the Arts in Nebraska City, Nebraska, working on a second book, “The Thousandfold Consent of Things and Animals.”