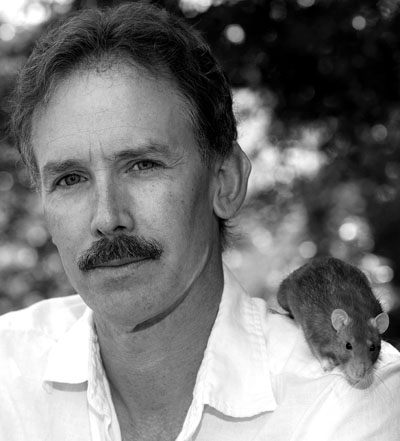 The reading starts at 7:30 p.m. and is free and open to the public. A book signing will follow.

“Mad Cursive” is McKinney’s third collection of poetry published in 2012. Called “truly courageous” and “elegant” by Claudia Keelan, author of “Missing Her,” the book explores the line between beauty and destruction.

D.A. Powell, author of “Useless Landscape,” says of the collection, “McKinney’s gentle-edged Taoist generosity is exceedingly redemptive, assuring, pointing us skyward and crying, ‘look.’ Here is a poet who has earned the title of ‘master.’”

McKinney studied kendo and swordsmanship while living in Japan.

McKinney sees his poetry and swordsmanship as parallel disciplines, each concerned primarily with “beauty and the asymptomatic perfection of spirit.” Born in Iowa, he spent much of his early life in California. After completing his master’s in the teaching of writing, he moved to Japan to study kendo and East Asian swordsmanship. During that time he taught conversational English to cover his living expenses.

Currently he is a professor of English at California State University in Sacramento, teaching literature and creative writing, and serving as creative writing coordinator.

McKinney’s two previous books of poetry, “Saunter” and “The Novice Mourner,” brought him acclaim as co-winner of the University of Georgia Press Poetry Series Open Competition in 2002, and recipient of the Dorothy Brunsman Poetry Prize in 2005. Other honors include The Dickinson Poetry Prize and a Gertrude Stein Award for Innovative American Writing. He is also a four-time Pushcart Prize nominee.

McKinney’s poems have appeared in over 100 national journals such as “American Letters & Commentary,” “Boulevard,” “Colorado Review,” “Ploughshares” and “Prairie Schooner.”