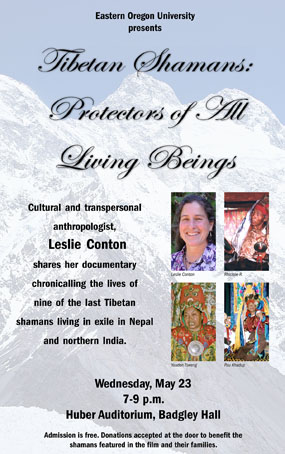 The presentation is from 7-9 p.m. in Huber Auditorium in Badgley Hall. Admission is free with donations accepted at the door to benefit the shamans featured in the film and their families. Refreshments will be provided and all are welcome to engage in a discussion with the filmmaker following the showing.

Conton, a cultural and transpersonal anthropologist, chronicles in the documentary the lives of nine of the last Tibetan shamans living in exile in Nepal and northern India.

“The audience will be introduced to a deeper understanding of shamanic cultures and concepts through the colorful portrayal of this ancient and endangered Tibetan healing tradition, as well as to the value of ethnographic film as a means to help preserve these traditions for future generations,” Conton said.

Conton produced the documentary primarily in service to the shamans and their descendants and to honor their contributions to the health and well-being of their communities. The film is also considered a testament to the richness and power of the ancient Tibetan practices.

“This will be such a rich experience and unique opportunity for the community to learn about shamanism,” said Ruth Davenport, professor of education at EOU. 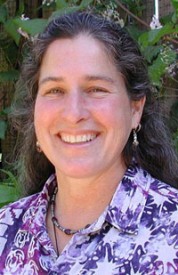 Davenport knew she wanted to invite Conton to visit EOU after attending a workshop on shamanic practices and learning of her extensive travels while making the documentary in West Bengal, Sikkim and Dharamsala in northern India, and Pokhara and Kathmandu in Nepal.

Students in Linda Jerofke’s introduction to cultural anthropology class will also meet Conton while she is on campus. Jerofke, a professor of anthropology, said her students will benefit hearing from an expert with nearly 40 years of fieldwork experience.

Conton has studied with traditional healers and shamans from not only Nepal and India, but also Papua New Guinea, China, Mongolia and several West Coast American Indian tribes. She is a founding faculty member and field associate for the Foundation for Shamanic Studies, a non-profit, charitable and educational organization, and a professor at Western Washington University’s Fairhaven College.