The exhibit titled “Anomalous” will open with a reception from 6-8 p.m. on April 6 in the gallery located in Loso Hall. Student work will be on display through April 20. Gallery hours are Monday through Friday, 11 a.m. to 4 p.m. 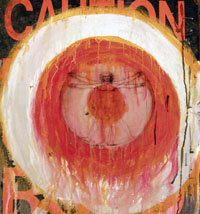 Damon Andrews’ work is inspired by his own experiences as a non-traditional student starting over in the middle of his life. His work is also influenced by his life-long struggle with depression and reflects his associations with self-judgment and societal expectations. He creates mixed-media pieces combining carefully chosen found objects with acrylic painting and collage.

Andrews uses his artwork as an outlet and voice for his struggles with self-image and depression.  He does this in hopes to connect with others facing similar hardships. 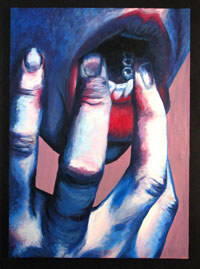 Ashley Grover’s work examines the innermost relationships between dueling aspects of a singular person.  She depicts the contrast between the comfort and torture experienced during both addictive behavior and psychological struggles.  Using herself as the subject for large-scale charcoal drawings and acrylic paintings, the work draws heavily on her own feelings of duality. This is in response to her identity and her distorted view of her self-image.

To portray her mental reactions to her feelings of dichotomy, Grover uses self-portraiture. These self-portraits depict discomforting situations to make visual psychosomatic ideas. Expressive mark-making contrasted with figurative realism not only brings tension and unbalance, it also reflects on the conceptual inspiration behind her work.

Lauren Hull’s art pieces exist in the zone between illusion and reality. She utilizes both sculpture and paint to highlight the curiosities of the natural world. In each work she uses a mixture of sound, movement, repetition, found objects and scientific reasoning to create a sense of believability in the absurd. Her natural subjects appear to belong to a bizarre history museum — one that opens the door to a new realm of the impossible.

Hull was born and raised on a farm and cattle ranch in the Grande Ronde Valley. Much of her childhood was spent caring for and befriending estranged animals such as calves, ducklings, raccoons, a hawk, and once, a hummingbird. Her close experiences with animals have influenced her decision to examine the peculiarities of nature. 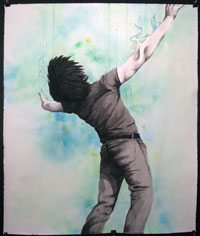 Haiden Kohl’s work explores the human relationship between the physical body and unseen forces such as auras and energy fields. His drawings and mixed media pieces depict the human form interacting and manipulating these forces.

Emphasis is made through Kohl’s use of color and material treatment, where color begins to speak as a metaphor. He uses himself as the model for many of his pieces, as a method of self-investigation. Depicting what is generally not seen and addressing negative space becomes important in his exploration. His motive is to create an awareness of non-physical essences in a society that is often only conscious of the physical.

For more information visit www.eou.edu/art/nightingale/index.html or connect with the gallery on Facebook.