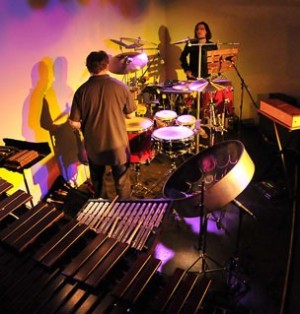 The duo stops in La Grande as part of a national tour to showcase the new music, scored for a wide array of percussion instruments including steel drum, marimba and drums, electro acoustic inventions, Native American flute and voice.

A portrait of the cultural hodgepodge of American heritage, this third album draws inspiration from the dark, surreal world of Edgar Allan Poe, to the rebellious freedom of Easy Rider; from the ancient, desolate plains of Minnesota, to the post-industrial streets of Brooklyn, Baltimore and Detroit. 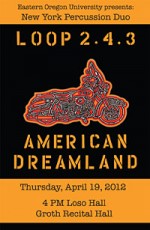 Praised for their “taut compositions with a stunning improvisational sense” (Time Out Chicago) and their “intricate, energetic performances” (New York Times), Loop 2.4.3’s original compositions resonate with the American musical traditions of jazz, rock and roll and contemporary classical chamber music. Incorporating the span of traditional percussion to innovative electro-acoustic instruments, voices and strings, their music is most often compared to the voices of Harry Partch, Steve Reich and Terry Riley, but “warmer, more linear” (NPR) and “much freer and less constrained in their movements” (Alarm Magazine). Loop 2.4.3 is an original voice that “sounds like part of a well-thought-out tradition. Only the tradition has never existed until now” (NPR-Fresh Air).