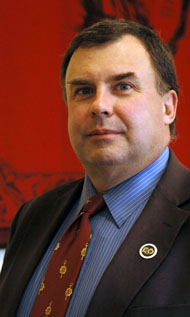 Adkison and his wife Jennifer, an associate professor of English and writing, will remain at EOU through the end of spring term.

In his nearly four years at EOU, Adkison has overseen academic programs and operations. EOU also hired two deans and launched innovative new initiatives during his tenure, including Eastern Promise.

“For Jennifer and I, working at Eastern and living in La Grande has been an incredible experience and one we won’t soon forget,” Adkison said. “Changes in our extended family have made it important that we move closer to home and there is a welcome opportunity at Henderson. We will miss our friends at EOU and in the larger Union County community, and will treasure the connections we’ve made here.”

Bob Davies, EOU president, is sorry to see Adkison go, but understands his reasons for leaving.

“Steve has exemplified the ‘strong provost’ model we sought,” Davies said. “It is clear he has a deep desire to remain at EOU and serve in his critical leadership role – we’ve had many discussions about it. However, it is equally clear that he and Jennifer’s family ties to the southeast are significant and it is important for them to be close to their elderly parents.”

“I’m looking forward to actively working with Steve throughout the spring,” he added.

Davies is planning to seek out and appoint an interim provost and will initiate a national search during the 2014-15 academic year.