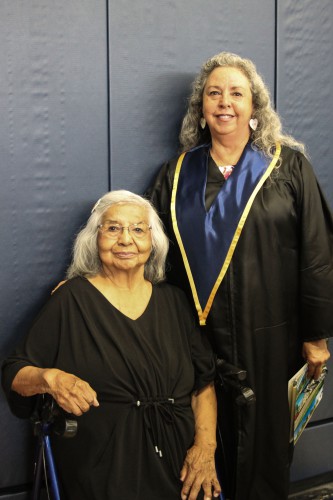 Conner, who serves as vice chair of EOU’s Board of Trustees, gave the keynote speech at the university’s commencement ceremonies June 16.

In her address, Conner highlighted her ancestors’ ties to the Grande Ronde Valley.

“My grandmother travelled this area 110 years ago as a child on horseback to gather food from plants, fish and game,” she said. “My great-great grandmother, a medicine woman, died nearby…. We continue to come here, to our home, today.”

Her mother Leah Conner, who attended the ceremonies, graduated from EOU 51 years ago with an education degree and inspired her children to further their education.

“My mom started college in 1950 at Willamette University, and she finished here 17 years later,” Conner said. “She was a non-traditional student by every stretch of the imagination — she was brown, she was tribal, she was a single head-of-household, she had children in tow, and she was a devoted daughter of parents who sometimes needed her on the other side of the hill in Pendleton. We were fairly poor in cash and assets, but rich in culture and family support.”

In 1984, Conner believes she and her mother became the first family on the Confederated Tribes of the Umatilla Indian Reservation (CTUIR) with master’s level graduates in two successive generations. Conner said that many more have joined their ranks since then.

“The good news is that education is the great equalizer in our society,” she said. “Her degree meant an end to lowly paid recreation jobs and waitressing.”

“She became a role model for me and all of the students in that school every day,” Conner said. “Everyone seemed to seek her advice. She was valuable and valued … she could help solve problems.”

In her own career, Conner has become a resource and a mentor to many. Anenrolled member of the Confederated Tribes of the Umatilla, she has served as director of the Tamástslikt Cultural Institute since 1998. Conner is Cayuse, Umatilla and Nez Perce, and actively mentors young scholars in tribal cultural preservation.

A well-published writer and speaker, she co-authored a chapter in the tribes’ history book “As Days Go By,” and contributed to “Lewis and Clark through Indian Eyes.” In 2007, she received the Ecotrust Indigenous Leadership Award for her work representing the CTUIR.

“My ancestors and all the generations of my family have revered the Grande Ronde Valley and the home of EOU, as it is a magnificent place of abundance to our Cayuse people,” she said.

A long-time Eastern Oregonian, Conner graduated from Pendleton High School and returned home after building a career across the country. She earned her bachelor’s degree from the University of Oregon, and went on to graduate from Willamette University’s Atkinson Graduate School of Management.

During 13 years at the U.S. Small Business Administration, Conner progressed from an internship position to the Sacramento District Director. Before that, she spent five years at a nonprofit in Seattle, working with Indian education projects throughout the Pacific Northwest.

The value of education runs deep in Conner’s family history.

“One hundred years ago, my grandfather returned from WWI and he didn’t yet have the right to vote — that came in 1924,” she said.

Her grandfather asked to take post-high school studies in drafting and surveying at a government boarding school, but, Conner said, “his chance to learn was denied. He was told to stay home and learn to farm.” Nonetheless, he helped begin the Indian Festival of Arts that preceded EOU’s longstanding Indian Arts Festival and Pow Wow.

“When my mother graduated all those years ago, her proud parents were here for commencement,” Conner said. “Her father insisted that his children go to college, and all but one of them did.”

In 2015, she joined EOU’s inaugural Board of Trustees.

“Bobbie has been a consistent contributor to our discussions and progress as a board,” Board Chair David Nelson said. “Her leadership and wisdom are highly valuable to this institution and its students. It’s an honor and a joy to work alongside her.”

“This is a very, very special place,” she said. “I love this place — this valley, the mountains, the rivers, the streams and this university. What I learned from my grandmother’s and grandfather’s stories about this homeland was this — it does not matter what anyone else thinks of you, it matters what you think of yourself. You have to believe in you and all of your possibilities. You must act on your beliefs. You can prevail.”

Conner’s speech, and the entirety of the commencement ceremonies, is available to view at livestream.com/eou.