Concert rewinds to one of music’s most revolutionary decades

Rewinding to one of music’s most revolutionary decades 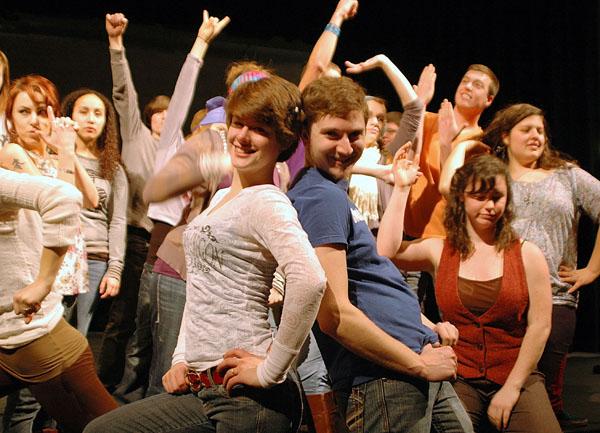 LA GRANDE, Ore. (EOU) – Bringing fresh sounds and new moves to chart-topping songs is a signature of the EOU music department and Chamber Choir, and their next concert aims to encapsulate one of music’s most revolutionary decades: the 1980s.

Students in Professor Peter Wordelman’s seminar class began an investigation last spring into billboard hits of the era, and the culmination of their project will play out on stage in “Totally 80’s Rewind” opening Jan. 25-26.

The show makes its public debut at 7:30 p.m. Friday in McKenzie Theatre in Loso Hall and promises to be fast-paced, fun and amusing. Repeat performances are at 4 and 8 p.m. Saturday.

A third performance at 7:30 p.m. on Jan. 24 is reserved for current EOU students. Students with ID can obtain a free ticket through the Eastern Student Entertainment Office in the Hoke Union Building, Room 313, the Arts and Sciences Office in Loso Hall, Room 154. Any remaining tickets will be available at the door.

Four current music students and a recent graduate are the architects of the show – both behind the scenes and on stage. Hip-hop, blue collar, metal, country and pop/rock favorites are among 35 selections performed with full choreography.

“We went on a mission to dig through music to find the textures we wanted in the show and what would also play to the choir’s strengths,” said class member Holly Sorensen, a senior.

“The 80’s were a pretty revolutionary time for music when it branched out into all different genres. Country, new wave, ‘butt rock’ and musicals were becoming popular. We even brought in a performance of ‘Revenge of the Nerds’ for a bit of humor!” she added.

Working together, the class built the concert program from the ground up – even arranging several pieces on their own.

“It’s been challenging, due to so many genres that emerged during this time,” said Luke Basile, fellow EOU senior.

Michael Jackson is his favorite 80’s artist, but Basile is arranging a rendition of “True Colors” made famous by Cyndi Lauper in 1986, and he is excited to hear it performed.

For Lindsay Martin, a junior, the project expanded her musical repertoire to genres beyond the rock songs of Journey and Boston – bands her parents listen to.

“It’s good to be exposed to other sides of the 80’s,” she said. “Country, for example, had more harmony and a blue-grassy feel.”

By contrast, EOU senior Mike Kellison grew up in the 80’s and was able to bring a different perspective to the class.

“I’m a fan of 80’s electronica and a few of these songs made it into the program,” he said.

Kellison and Basile both play bass and guitar and are performing with a large ensemble accompanying the choir, which Sorensen and Martin are also members of. The all student and faculty “house band” also includes two pianists, a percussionist, a trumpeter, two trombonists and a violinist.

EOU alumnus Jonathan Davidson is returning to help his former classmates with final planning for the concert, and said the project strengthened his music IQ.

“I really enjoyed researching the top 100 hits and seeing which songs I knew and didn’t know,” Davidson said. 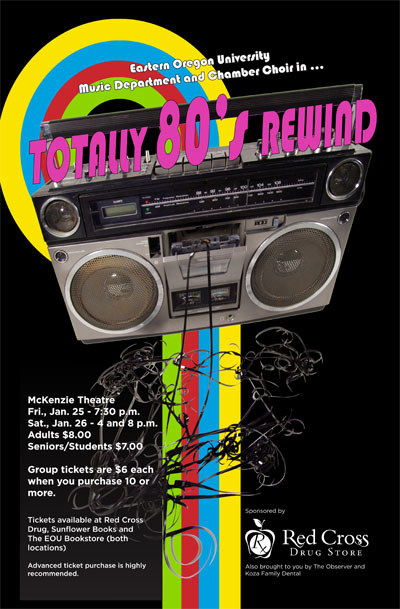 Adding to the diversity of the show is original choreography by Catherine Herrmann, who attended EOU and went on to earn a degree in dance performance from the University of Georgia-Athens.

Herrmann is rehearsing with the Chamber Choir as a whole, and a smaller group of advanced dancers who will perform on select numbers. The program also includes four complete costume changes.

Tickets to “Totally 80’s Rewind” are $8 for adults and $7 for EOU students and senior citizens. Groups of 10 or more pay $6 per ticket. Purchase tickets in advance at Red Cross Drug Store, Sunflower Books, the EOU Bookstore and the Mountaineer Market at 1008 Adams Ave.