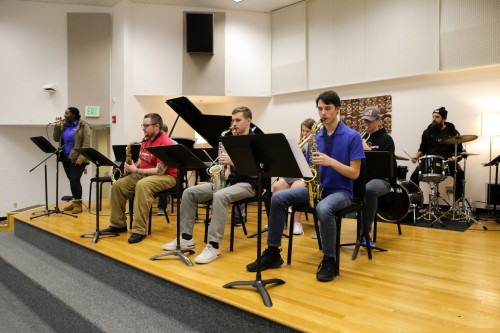 Many of the arrangements were written specifically for the band by Greg Johnson, including the jazz standard “I’ll Be Seeing You.” Johnson also adapted Tadd Dameron’s “Lady Bird” and combined with the Miles Davis melody based on it (“Half Nelson”). The little-known hard bop gem, “Hindsight” by tenorist Junior Cook will feature alongside bassist Steve Swallow’s “Eiderdown,” and another bop melody attributed to Miles Davis, “Donna Lee,” arranged to feature an unusual pairing of alto and tenor saxes.

A Matt Cooper arrangement of the vocal standard “Comes Love” rounds out the program with “Night Dreamer,” from Wayne Shorter’s first solo album in 1964. Cooper also led the development of a “head” arrangement of “Is You Is Or Is You Ain’t My Baby,” Louis Jordan’s early 1940s hit, and Thelonious Monk’s famous blues line, “Straight No Chaser.” Finally, Cooper directed two Keith Jarrett compositions from his early ’70s “Belonging Quartet,” which featured Norwegian musicians such as saxist Jan Garbarek.

Admission to the concert is free, though donations are accepted to benefit music scholarships. For more information call Matt Cooper at 541-962-3559.

At the helm of EOu’s College of Business, Ed Henninger values writing as a technical skill and used it to publish a chapter book recently.
Read more