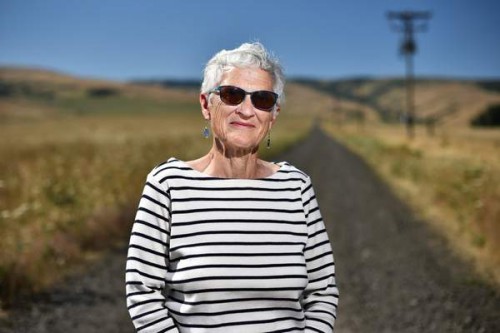 Husted will read from her new novel, “All Coyote’s Children,” at 7:30 p.m., on Oct. 16 in the Pierce Library Reading Room. The event is free and open to all.

“All Coyote’s Children,” recently published by Oregon State University Press, tells the story of Jack and Annie Fallon and their son Riley, who spend the school year in Portland and summers in northeastern Oregon on land surrounded by the Umatilla Indian Reservation.

The late Ursula Le Guin said of Husted’s novel, “The emotional intensity of ‘All Coyote’s Children’ might be overwhelming, if the characters weren’t so humanly lovable. Their troubles, though great and deep, are seen in a larger perspective of society, history, landscape, that admits sympathy but not self-pity, and lets us share both their pain and their hope.”

And Molly Gloss praised the novel, too, saying, “Bette Husted’s ‘All Coyote’s Children’ is that rare thing: a novel so real and heartbreaking, so compassionate and assured and meaningful, that I know the people on its pages will stay with me always — fully alive in my mind — as real as the Eastern Oregon landscape they inhabit. Husted’s open heart is in every line of this book. Though she does not veer away from the truth of cataclysmic events, there is humor and great kindness here, and the healing strength of community. I couldn’t have loved this book more.”

Husted is the author of “At this Distance: Poems” (Wordcraft of Oregon, 2010), the chapbook “After Fire” (Pudding House, 2002). Her memoir, “Above the Clearwater: Living on Stolen Land” (OSU Press, 2004), was a finalist for the Oregon Book Award and won the WILLA Award in creative nonfiction for writing about the rural West. Her second collection of nonfiction is “Lessons from the Borderlands” (Plain View Press, 2012). Her works have been featured in “Northwest Review,” “basalt,” “Fourth Genre,” “The UTNE Reader,” and numerous other publications.

In an interview with B.T. Shaw after the publication of “At this Distance: Poems,” Husted reflected on the similarities she sees between prose and poetry.

“Good prose shares so many of the qualities of poetry — especially the rhythms of the narrative voice — that for me, personal essays and poems aren’t as different as they might seem. Images in prose can make the same kind of associative leaps that they do in poems, connecting events and ideas in a circular whole rather than the linear development we learned to associate with ‘essay writing’ in school. Of course, poetry is more condensed — like freeze-dried backpacking food, I used to tell students, a poem offers the crystallized essence, and the reader’s mind adds the water.”