EOU file photo / Students are preparing a variety of group and individual performances for the International Dinner & Show February 27. 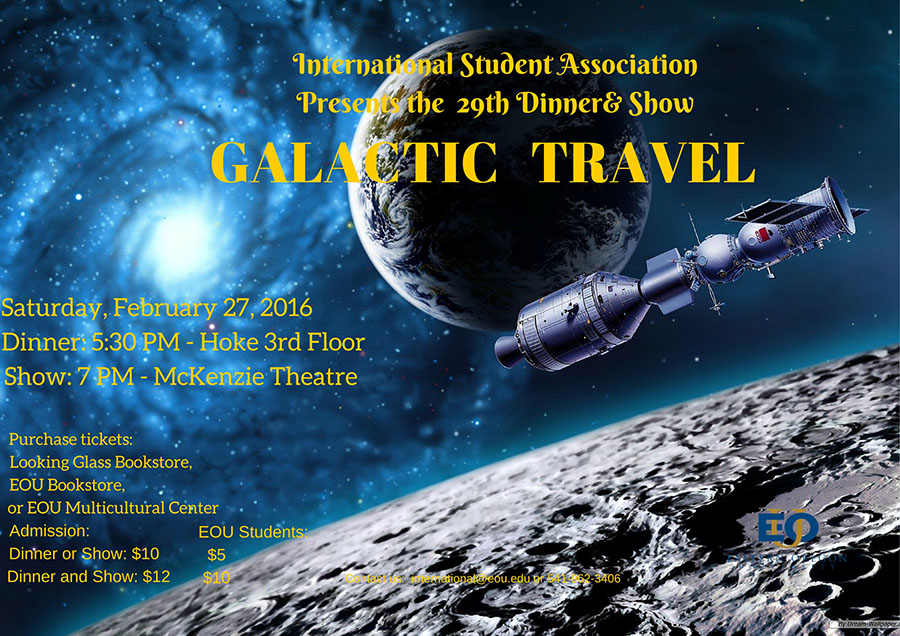 The event begins Saturday, Feb. 27 with dinner at 5:30 p.m. on the third floor of the Hoke Union Building. It’s an opportunity to sample global cuisine prepared and served by members of EOU’s International Student Association (ISA).

On the menu are appetizers traditional to South Korea and Mexico, two main courses from Germany and the Philippines, and desserts from Japan and Germany.

The show starts at 7 p.m. in McKenzie Theatre in Loso Hall with music and dance productions, an international fashion exposition and other entertainment.

EOU sophomore and communication studies major Yeonhee Yiu, of South Korea, is the ISA vice president. She is in charge of food and stage lighting for the event.

“It’s going to be great and also a bit different than usual because of the galactic travel concept,” she said. “We are a close group and everything is coming together really well!”

There are about 20 international students currently involved with ISA, but membership is open to all. Countries represented are China, Federated States of Micronesia (Yap, Chuck and Pohnpei), France, Germany, Hawaii, Japan, Mexico, Republic of Palau, the Philippines, South Africa, South Korea, the United States and Vietnam.

Several other EOU student groups are collaborating on performances for the show, including the Chemistry Club, Black Student Union, Speel-Ya, Navigators Club and the Student Council for Multicultural Affairs.

Admission is $10 to the dinner or show individually, or $12 to attend both. Tickets are available at EOU’s Multicultural Center or bookstore, both located in the Hoke Union Building, and Looking Glass Books at 1118 Adams Avenue.