Original post: Tuesday, October 7, 2014 11:25 am
Republished with permission from The Argus Observer

Story by Jessica Else 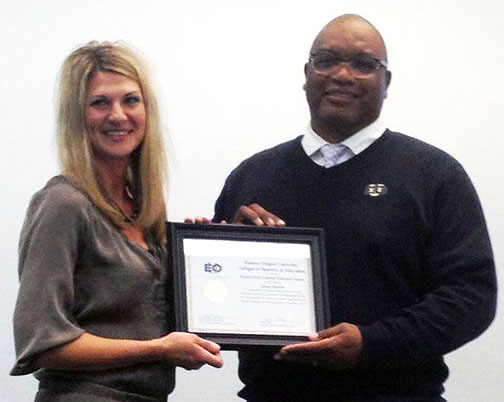 “It doesn’t mean that it has to be any one particular county in the state. We’re just recognizing great work that people have done.”

Wenger, who spearheaded the award’s creation, said those who qualify are EOU alumni nominated by education professionals who work in the EOU service region. That region includes the 10 counties with which Eastern Oregon University has partnered.

“The critical thing is that they have a history of outreach to diverse families and communities,” Wenger said. “What they’re doing should be innovative and embracing to everybody.”

This is the award’s first year, and Wenger said she was thrilled to debut it in Ontario. Local businesses, including Jolts and Juice Co., donated prizes for the award recipients. 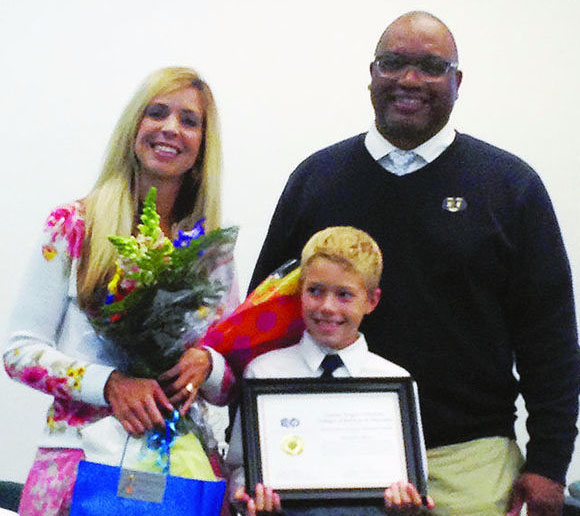 Raeschelle Meyer, director of student services at Four Rivers Community School in Ontario, also received an award. She is pictured with her son Kyle.

“The wonderful thing about the Ontario area is that you ask people if they’d like to support this, they don’t say, ‘What’s it for?’ They say, ‘What can I give you, and how much?’” Wenger said. “Especially when they found out who the recipients were.”

She has worked hard to make connections with families living in poverty, Wenger said, and has created several programs to raise funds for district needs, such as the Catch the Teach run that raises money for playground equipment. She also works with local services like Lifeways.

“I don’t feel like this is just me,” Dayton said. “It’s everyone that has believed in me and supported me and everyone that I’ve worked with along the way that have really helped us, as a district, get to where we are and supporting our families and our communities.”

Meyer, the second award recipient, was influential in starting the Ontario onsite teacher preparation program in 1998.

She graduated from the program with its first cohort in 1999. She has worked as a teacher in Willowcreek and Vale.

Meyer is part of Four Rivers Cultural Center’s outreach efforts for the high-poverty population and helps provide blankets and other necessities for families.

“I feel very privileged to have been a part of EOU,” Meyer said.

“I continue to talk with kids and families about the TVCC and Eastern connection, knowing they can still stay here, get their education and give back to the community in that way.”

Meyer also stressed the importance of teamwork, a point that was highlighted throughout the awards ceremony.

“They are the reason that I’m here, really, is that we all work as a team — everyone here that is working in education,” Meyer said.

“We’re all in this together.”