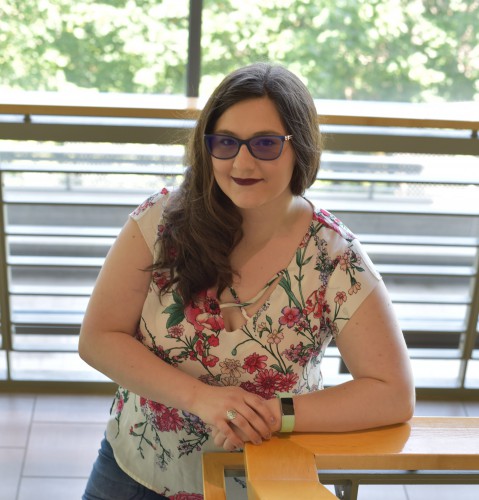 Graduating with a bachelor’s degree in biochemistry and a minor in psychology, Burghard met members of EOU’s science faculty during middle school, when her love for learning had just surfaced.

“My older sister was visiting campus and I came along,” she said. “I still remember what Dr. [John] Rinehart’s office looked like, and when I met him again on campus years later, I knew right away that it was him.”

But Burghard’s connection to EOU goes back even farther. Her great-grandmother earned a teaching degree from the university, and both of her parents and grandparents are alumni as well.

Burghard moved from Vernonia to Ione in 2012 as a sophomore in high school, and began taking online classes through Eastern Promise.

“After that first visit in middle school, I knew I wanted to come to Eastern,” Burghard said. “I really latched onto all of the outdoor opportunities.”

She enrolled in a wide range of outdoor courses, learning the basics of whitewater rafting, rock climbing, mountain hiking and snowboarding.

“I actually fell in love with snowboarding after taking the class,” she said. “I bought my own board and I go all the time.”

Burghard’s experiences encompass the wide range of activities EOU students engage in. She lived on-campus and worked as a resident assistant. She also took part in student clubs, serving in leadership positions in both Chemistry Club and Pre-Professional Health Club. These academic clubs provided meaningful co-curricular activities, and Burghard said her participation paired well with undergraduate research and internship opportunities.

“Dr. Kelley has been a huge support,” Burghard said. “He’s offered to help out with non-school stuff, too. He really cares about his students.”

Her work on campus led to an internship doing research at Portland State University in 2016, but an ongoing position at Wildflower Lodge in La Grande also left a lasting impression.

Burghard worked as a medication aide at the assisted living facility, and said the high-impact, experiential learning environment guided her career aspirations.

“I plan on attended medical school, and I’ve started to get interested in geriatric care,” she said.

Burghard has also considered virology and rheumatology, which includes many general autoimmune and inflammatory disorders, as she looks ahead. She plans to apply to graduate programs at Oregon Health and Science University.

Her zeal for the classroom hasn’t dimmed even during difficult periods. She struggled under a heavy load of credits, internship hours and extracurriculars during her junior year, but said a strong support network helped her through.

“I pretty much love learning,” she said. “It can be a lot of work, but I had a great time in almost every class.”

Burghard will be recognized at the Student Awards Assembly on June 15 in McKenzie Theatre, and she’ll speak at EOU’s commencement ceremony on Saturday, June 16 in Quinn Coliseum. EOU will hold two commencement ceremonies this year, at 10 a.m. and 2 p.m. in the main gym. For more information, visit eou.edu/commencement.