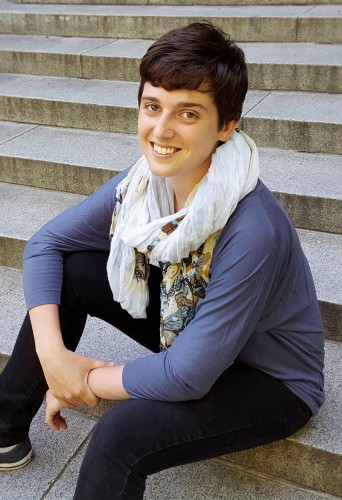 LA GRANDE, Ore. – Pierce Library is the intellectual heart of EOU and the La Grande community, and student workers have long formed the heart of the library’s support services. Senior Charlotte Bowers has become an integral part of the library’s student workforce, but her standout achievements at EOU go lightyears beyond managing government documents and interlibrary loan requests. Bowers’ enthusiasm for research, engaging personality, and persevering pursuit of education earned her the 2017 President’s Scholar Award.

“It’s very meaningful because it wasn’t something I thought I’d be able to do,” she said of receiving the prestigious recognition. “Getting my bachelor’s degree four years ago seemed like a pipe dream. Being at EOU nurtured me, and I was able to be very successful… The President’s Scholar Award is the culmination.”

The road to receiving a bachelor’s of science in history led Bowers through public and private colleges in three states. Along the way she maintained an extracurricular focus on serving underprivileged community members, working with refugee populations while studying political science and history at Boise State University and Wheaton College in Illinois.

Bowers’ role in the library as a government documents and interlibrary loan assistant continues a line of work that she began in Klamath County as a circulation assistant. The confluence of her on-campus employment and academic studies impressed her capstone advisor, Nicole Howard.

“Charlotte managed to do the very thing we hope our students will do: link her academic work at EOU to bigger ideas and long-term goals,” Howard wrote in a letter of recommendation. “She completed her capstone with a clear sense that she wanted to be an archivist, working in special collections, preserving and preparing materials for others to use.”

History, a subject that Bowers has long studied, became her passion when she enrolled at EOU in fall 2015 after a hiatus from higher education.

“I decided on a history major because I imagined that it was a subject to which I already knew most of the answers,” Bowers wrote in a personal essay. “I imagined it would be easy. But the first day that I walked into Dr. Dearinger’s History 201 class, prepared to be bored, I was proven entirely, fantastically wrong.”

Ryan Dearinger, an associate professor of history at EOU, detailed Bowers’ outstanding scholarship in his letter of recommendation. He serves as advisor for Phi Alpha Theta, the national history honor society of which Bowers is a member.

“Charlotte casts an incredibly wide net as a researcher, looking into history, gender and sexuality, politics, art, fashion, print culture, and advertising,” says Dearinger. Her capstone, ‘A Most Beautiful Form’: Genderless Ideals in Aesthetic Fashion and Design was as interdisciplinary as any I’ve seen in my time at Eastern, and the results will be of great value to Charlotte as she furthers her academic career in one of the nation’s top Ph.D. programs which combines history, archival studies, and library science.”

Bowers has come a long way in her educational journey, graduating from Baker High School in 2011 as an honor student who bolstered her education with a variety of impressive extracurricular activities. She participated in competitive swimming and cross-country teams, had internships with a local law firm and the US House of Representatives, and volunteered in libraries and museums.

“Charlotte possess qualities such as dedication, the willingness to work hard, affability, and a desire to learn more about world cultures which make her an excellent candidate for this honor,” history professor Mandy Link wrote, echoing comments made by other members of history faculty.

Bowers will be honored at the Student Awards Assembly and address her fellow graduates at commencement on June 17. She will soon apply for graduate school, but plans to spend a year working and volunteering outside of academia. Her professors attest that no matter where Bowers applies herself, her efforts will be met with success.

“It is rare that I can predict with such certainty that an individual will exceed expectations at any school and in any program or career field,” Dearinger said. “Charlotte Bowers is that student, and I look forward to charting her future success in graduate school, in her community, and beyond.”