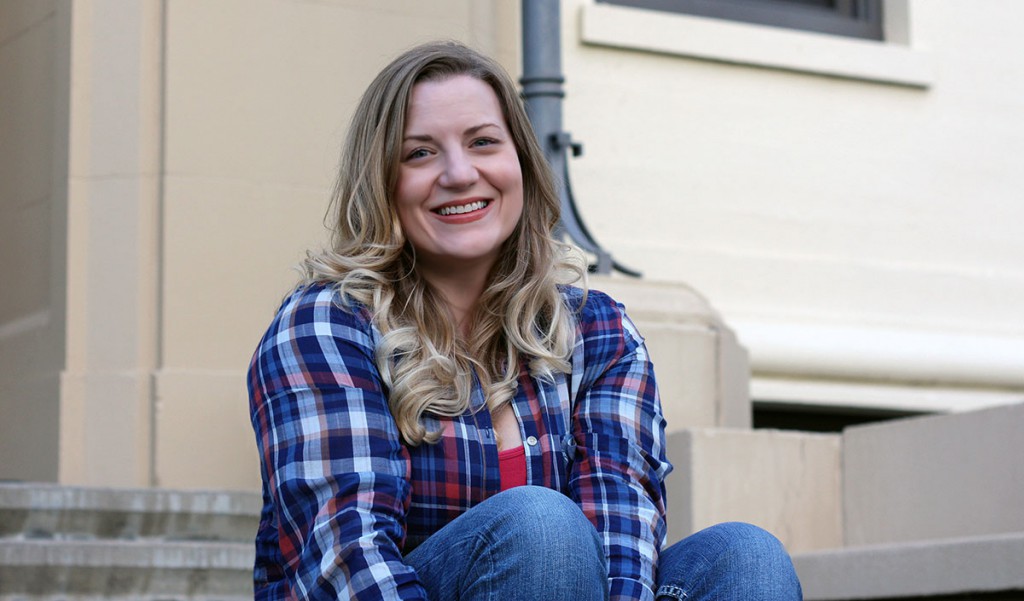 LA GRANDE, Ore. June 1, 2016 – When Cassie Gray-Jeffries enrolled in Writing 121 at Eastern Oregon University in the spring of 2012, she didn’t know what to expect. She hadn’t been a student in over a decade.

Her anxieties of returning to school were assuaged in Nancy Knowles’ class that term, leading Gray-Jeffries to enroll in the fall as a full-time student.

“It just kind of set the tone for everything that happened after that,” said Gray-Jeffries, a single mother of three.

At first, she thought pursuing a nursing degree was a practical choice, but her longtime interest in archaeology led her down a different path.

On June 11, she’ll not only graduate with distinction with a bachelor’s of science in both anthropology/sociology and history, she’ll also address her fellow graduates as the 2016 EOU President’s Scholar.

The moment is a milestone for Gray-Jeffries, a Union County native who graduated from La Grande High School in 1998.

“I wanted to finish my degree for a long time,” she said. “That was a dream.”

After high school, she took a few classes at Eastern before relocating out of state to marry and start a family. As a stay at home mother, her life revolved around her children. In the back of her mind, though, the desire to complete her degree tugged at her.

“I loved being a full-time mom, but the career that I was passionate about required a degree and I felt that by not being able to pursue that, I wasn’t living up to my full potential,” she said. 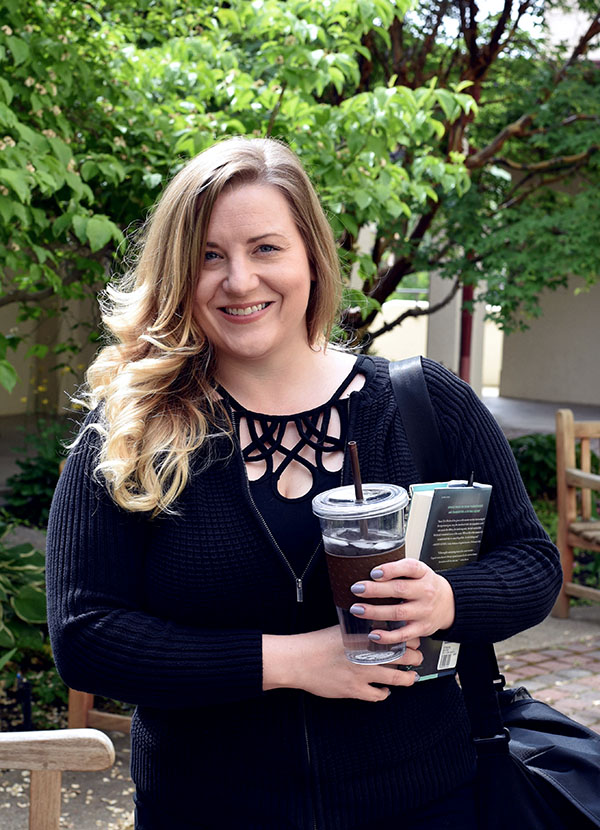 Photo by Laura Hancock / Gray-Jeffries received an Oregon Heritage Fellowship for her research on Japanese-Americans in Union County during the World War II era.

Gray-Jeffries felt trapped by her circumstances but eventually moved back home to make her dream a reality, her children a driving force behind the decision.

“I wanted them to have an example,” she said.

Leaving a rough past behind, she wanted to show her boys that she could achieve her dreams, and balance work and family.

And though Gray-Jeffries’ resume boasts plenty of accomplishments over the last four years, her journey hasn’t been easy.

“I really had to push through a lot,” she said of her major life transition.

Gray-Jeffries attributes her success to the help of her friends, family and professors, joking that they should all take the stage with her at graduation.

“I am by no means doing it by myself,” she said.

After “coming unglued” as a full-time student and mom, Gray-Jeffries realized she had a full plate but had plenty of help around her. Her parents have taken up much of the burden with her kids, taking them to baseball practice and watching them when she’s needed study time. Her dad mows her lawn. Her friends have served as emotional support, there for her when she has inevitably needed to vent.

Rory Becker, assistant professor of anthropology, and Ryan Dearinger, associate professor of history, helped her see potential in pursuing her love of “anything old.”

“The first thing both of them did is explain how the degree is applicable,” Gray-Jeffries said. “They have encouraged me so much — and other students. They know who their students are. I don’t ever feel like I’m a statistic.”

To her own credit, her professors say she has excelled because of her hard work and determination.

“Cassie is an incredibly gifted, yet hard-working undergraduate,” Dearinger said. “She has overcome more than many of her peers combined, and she’s done it with grace, skill and dignity. Nothing seems to rattle or faze her, and she carries herself in a professional manner.”

Becker noted that despite obstacles, she has made her education a priority, even when it means stepping outside the classroom. Gray-Jeffries has volunteered with the Cultural Heritage & Archaeological Research Technologies (CHART) lab doing archaeological survey throughout her time as a student.

“She’s one of those folks who could come up with 100 perfectly good reasons to not participate, but she shows up and does it,” Becker said. “She’s made it a priority and acts on it.” 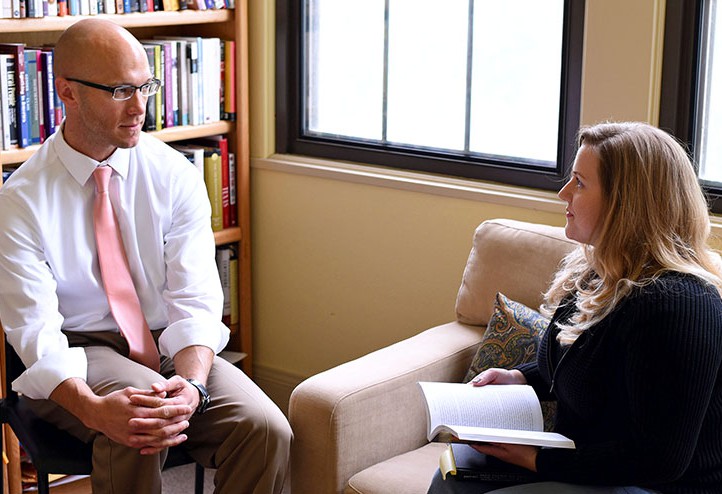 Photo by Laura Hancock / Ryan Dearinger, associate professor of history, visits with Gray-Jeffries in his office in Ackerman Hall. “Cassie is an incredibly gifted, yet hard-working undergraduate,” he said.

Dearinger said Gray-Jeffries’ research on Japanese-Americans in Union County during the World War II era highlights her capability and drive. The research earned her the title of Oregon Heritage Fellow, the first EOU student to receive such an accolade.

“Her work resulted in one of the most creative and significant interdisciplinary projects undertaken by an EOU student,” Dearinger said.

Becker said credit for that project lies solely with her.

“It was of her own accord,” he said. “She came up with that and pursued it. It’s her research project.”

During Gray-Jeffries’ time at EOU, she has also been the recipient of the 2015-16 Soroptimist International of La Grande EOU Scholarship and is involved with several honor societies, including Phi Kappa Phi and Phi Alpha Theta. She currently serves as chapter president for the National Society for Leadership and Success, Sigma Alpha Pi.

On top of this, Gray-Jeffries has found the time to volunteer at Central Elementary as a room parent.

In one word, she sums up her emotions this spring with “grateful” because she’s thankful to those who have played a role in her success.

“I’m also really grateful that this is a second chance for me I never thought I’d have,” she said. “I’m just so glad to be here.”

After graduation, Gray-Jeffries plans to continue doing archaeological survey with CHART and will also begin working full time at Grande Ronde Chiropractic Clinic. Down the road, she has her eye on graduate school.

In the meantime, though, she’s looking forward to spending more time with her boys, who are excited that she’ll soon be working only during the week.

“I love the mountains, and I’m excited to take them out hiking and camping and show them what it’s like to be a real Eastern Oregon kid,” she said. “Spending quality time with my parents is also on the top of my list.”

Looking back on her journey to graduation, Gray-Jeffries encourages other students, especially single parents, to persevere.

Perhaps most importantly, she wants others to know they don’t have to go it alone, a lesson she said she learned the hard way.

“It’s never a bad thing to ask for help. You’d be surprised how many people are willing to step up.”