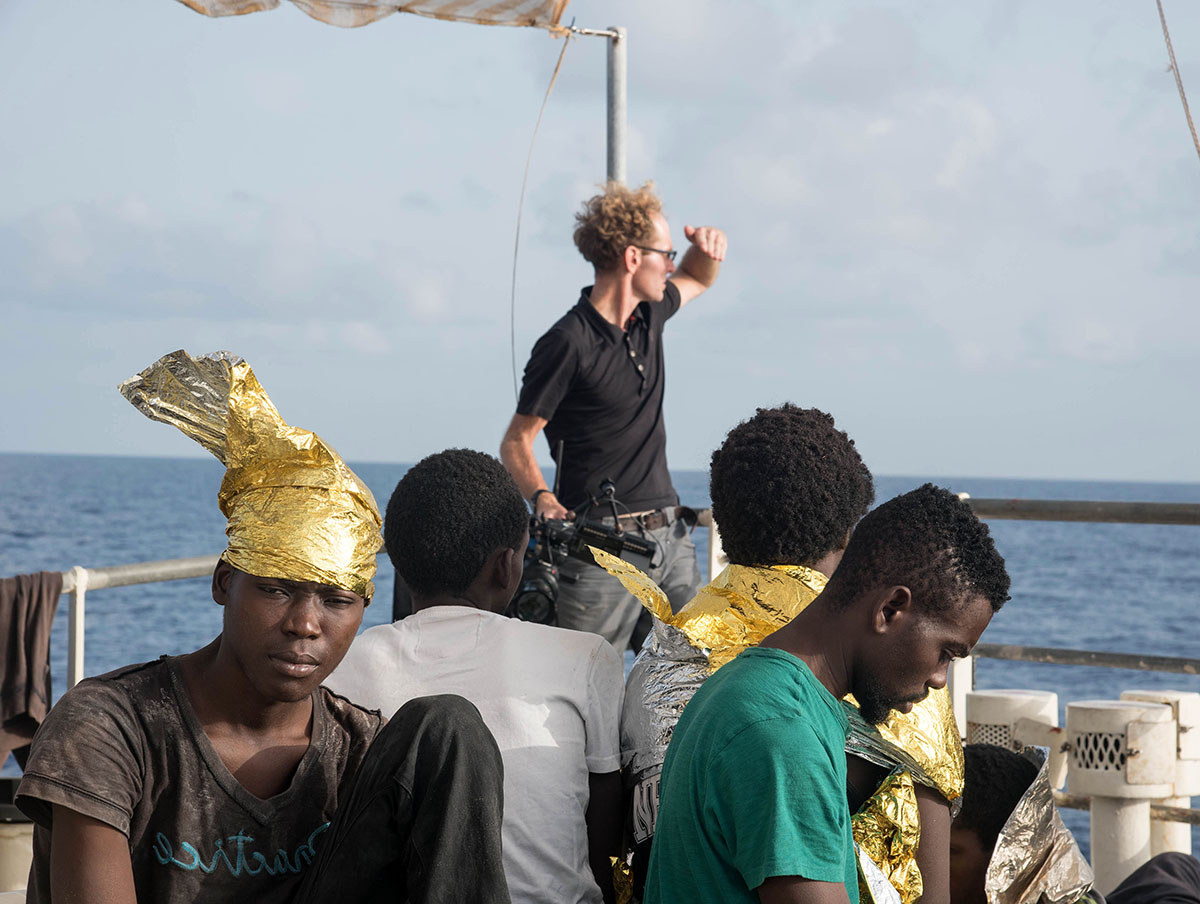 Submitted photo / Skye Fitzgerald filming a search and rescue operation in the Southern Mediterranean in October.

LA GRANDE, Ore. November 16, 2016 – When Skye Fitzgerald broke his hand in a bicycle race, he had no idea his Portland specialist would become the subject of his next documentary.

In his consultation with surgeon Hisham Bismar, Fitzgerald learned the orthopedic hand specialist is from Syria, and the appointment evolved into a conversation about the Syrian conflict, the region’s medical needs, and Bismar’s desire to volunteer his aid.

Six months later, Fitzgerald heard from the doctor, and soon enough they were en route to the Syrian border.

Fitzgerald, a 1993 graduate of Eastern Oregon University and this year’s recipient of EOU’s Distinguished Alumni Award, enjoys the success of “50 Feet From Syria,” not for his own benefit but for the story it tells.

“I do it because I have to do it,” the filmmaker said.

The 2015 film highlights Bismar’s journey to Turkey — near the Syrian border — where he volunteers his time and expertise to numerous patients affected by the violent authoritarian regime of Syrian President Bashar al-Assad. 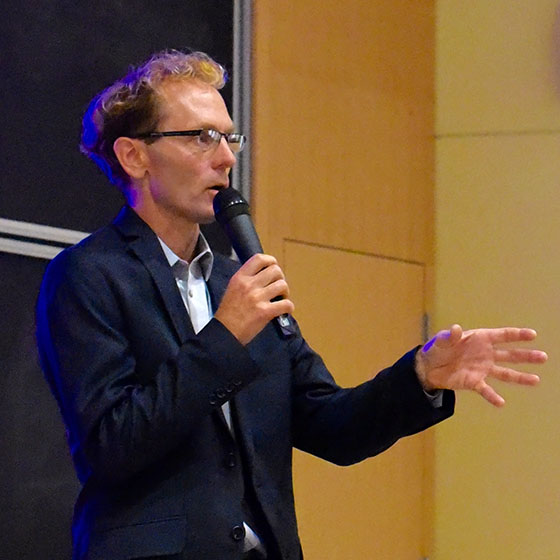 Fitzgerald answers audience questions during a screening of his latest film “50 Feet From Syria” at EOU this fall.

“I’m drawn to crises in some ways that are difficult to understand, but are important to understand,” said Fitzgerald, who recently returned to La Grande for EOU’s Homecoming and the Eastern Oregon Film Festival, with a special “50 Feet From Syria” screening on the EOU campus as part of the activities.

Fitzgerald said it was a great honor to be named a distinguished alumnus.

“It just serves as further motivation to engage with EOU and be part of furthering EOU’s footprint,” he said. “This place shaped me. I love this valley and I love this institution.”

His high school in the small rural town of Monument didn’t offer a theater program, but he loved English and one of his teachers made an effort to put on plays for the school. When it came time for college, Fitzgerald wasn’t ready to head to a big city.

“I didn’t want to live in the city,” he said, adding that he enjoyed the opportunity to be up in the mountains on his bicycle in just a few minutes. Deciding to go to Eastern, he said, was “one of the best choices I ever made.”

“I have both of them to thank for getting such a good education at EOU,” Fitzgerald said, noting that the one-on-one support from professors was invaluable. “As a young man, you need that kind of encouragement.”

That support and his small classes at Eastern, he said, opened his eyes to the arts and led him to pursue his passions, originally theater and later film.

Fitzgerald is drawn to documentaries for their “ability to engage topical issues, to bring issues to the light of day, and probably mostly to shine a light on everyday heroes that people might not otherwise know about,” he explained. 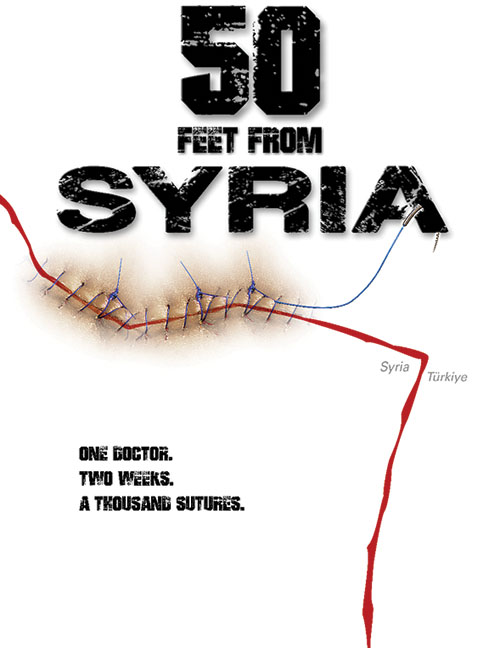 His documentary career has taken him around the world to the Democratic Republic of Congo, Rwanda, Cambodia and other places, often in conflict zones. Just before his visit to La Grande, he was on a search and rescue mission off the Libyan coast, where he witnessed the rescue of more than 2,000 refugees.

“Being in that situation you see a scale of suffering that makes you sit up in your cosmic seat and say, ‘Suffering is real,’” Fitzgerald said, noting that his two-man crew on occasion stopped filming in order to help with rescue efforts. That decision, he said, was a no-brainer, even if it meant the resulting footage might not be as strong.

For the EOU theater graduate, the traumatic scenes invigorate his desire to share those stories.

“I’ve got to bring this back and do whatever I can to touch people,” he said. “We need to be inspired. Documentaries allow us to show the horrors of the world, but mitigate that with the beauty of humanity through individuals willing to act.”

Following his graduation from EOU, he enrolled in a master’s of fine arts program at the University of Oregon for directing for the stage. A class on TV directing changed his trajectory.

Just before graduation, he was lined up to go full-time with a Eugene cable company, but the company was bought out and a hiring freeze left him without prospects.

Through a teaching assistant friend, he was hired on the set of “Ricochet River” as a production assistant. Released in 2001, it was actress Kate Hudson’s first feature film.

“I knew I needed to learn and just soak it all up,” Fitzgerald recalled. “I did everything I could to be near the camera department.”

His strategy paid off, as he was quickly assigned to the department. Then, after a conversation with the director as he drove her from one location to another, Fitzgerald was named Second Unit Director, a good credit for a recent MFA graduate.

“I thought that would lead to a nice stepping stone to the feature film world,” he said. “But it didn’t.”

That’s when he decided try another route: documentaries. 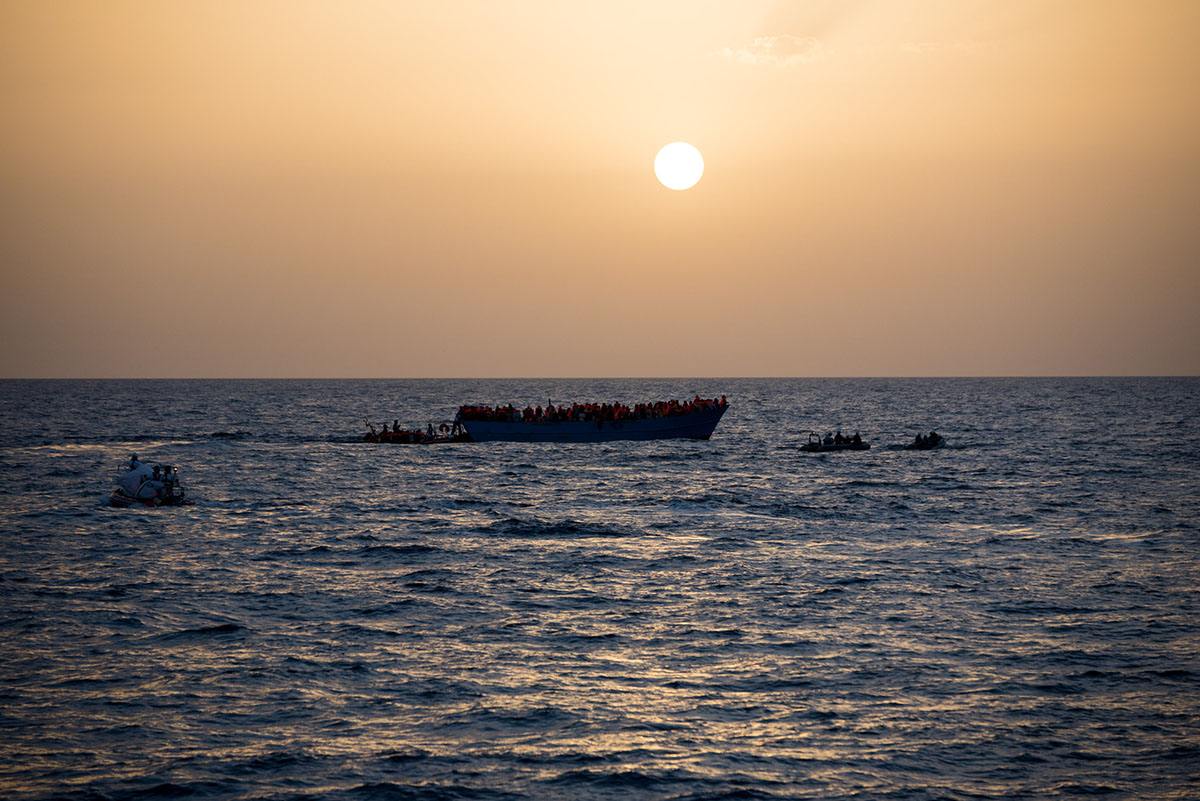 Submitted photo / A wooden boat off the coast of Libya with over 700 refugees evacuated during the course of a day where Fitzgerald was filming recently.

As the founder and owner of Spin Film, Fitzgerald said he usually follows his instinct when looking for ideas.

“Usually one story leads to another,” he said.

And while interest in the subject is important, FItzgerald emphasized that complex issues must be explained through people in such a way that it elicits empathy among the audience.

“Touch the heart first,” he said, “and then it goes up to the brain.”

One of his favorite films he’s produced is “Finding Face,” which tells the story of an acid attack victim in Cambodia. Many of his works highlight human rights issues, a topic Fitzgerald feels may not always be popular.

“What’s different fundamentally (about “50 Feet From Syria”) is it’s on a topic that more people care about and it has more traction in the media,” he said.

Fitzgerald has no desire to strike it rich making films, noting that the best films aren’t always the ones that makes the most money. Rather, he seeks to work within his own sphere of influence.

“I do believe that if you do that and do it well, and your craft is good enough, your story strong enough, you will find an audience,” he said.

The alumnus, who minored in creative writing, said he enjoyed reminiscing with EOU President Tom Insko when he was back on campus for Homecoming. Former classmates, the two walked together out onto the football field during halftime of the football game.

“That was a great moment,” said Fitzgerald, who ran cross-country as a student. “It was nice to see that someone’s in position at the helm of the university who deeply believes in its mission as a regional institution.”

« Board of Trustees meeting summary | Get involved in #GivingTuesday »