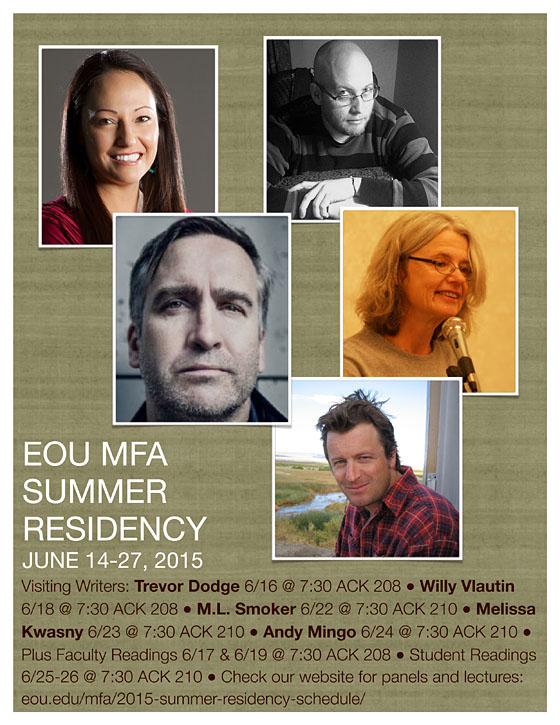 All readings, lectures and panels are free and open to the public. Books will be available for purchase during the events. Check the MFA program website for a daily schedule of panels and lectures at www.eou.edu/mfa. For more information contact David Axelrod, program co-director, at 541-962-3633.

Trevor Dodge is the author of two collections of short fiction, “The Laws of Average and Everyone I Know Lives On Roads,” a novella “Yellow #10,” and collaborator (with Lance Olsen) on the writing anti-textbook “Architectures of Possibility: After Innovative Writing.” He teaches writing, literature and comics studies at Clackamas Community College in Oregon City and the Pacific Northwest College of Art in Portland. His work has appeared on or is forthcoming in The Butter, Little Fiction, CHEAP POP, Juked, Hobart, Gobshite Quarterly, Metazen, Western Humanities Review, Golden Handcuffs Review, Gargoyle, Notre Dame Review, Natural Bridge and Fiction International.

M. L. Smoker belongs to the Assiniboine and Sioux tribes of the Fort Peck Reservation in Northeastern Montana. Her family’s home is on Tabexa Wakpa (Frog Creek). She holds an MFA from the University of Montana in Missoula, where she was the recipient of the Richard Hugo Fellowship. She is also a graduate of Pepperdine University, and attended UCLA and the University of Colorado, where she was a Battrick Fellow. Her first collection of poems, “Another Attempt at Rescue,” was published by Hanging Loose Press. Her poems have also appeared in Shenendoah and South Dakota Review and have been translated for Acoma – an Italian literary journal published by the University of Rome. Smoker currently resides in Helena, Mont., where she works for the Office of Public Instruction in the Indian Education Division.

Melissa Kwasny is the author of the poetry collections “The Archival Birds,” “Thistle,” “Reading Novalis in Montana” and “The Nine Senses,” as well as the novels “Modern Daughters of the Outlaw West” and “Trees Call for What They Need.” Her collection of essays is “Earth Recitals: Essays on Image and Vision.” She is also the editor of “Toward the Open Field: Poets on the Art of Poetry 1800–1950,” and, with M. L. Smoker, the anthology “I Go to the Ruined Place: Contemporary Poems in Defense of Global Human Rights.” Her most recent poetry is collected in “Pictograph.”

Andy Mingo is the Portland-based director/producer of seven shorts and one feature length film, “The Iconographer.” He gained recognition as several of his films were included at film festivals and screenings around the world. His most recent film, “Romance,” was adapted from a story by “Fight Club” author Chuck Palahniuk. “Romance” had its world premiere at the 2012 Raindance Film Festival and went on to screen at Cinequest, the Seattle True Independent Film Festival and the Portland Film Festival. In 2012 Mingo was invited to the Paris-Sorbonne University where he lectured on the process of adapting Palahniuk’s fiction to the screen. He received the Governor’s Award for Innovation for his work educating students for careers in the rapidly growing film industry in Oregon and was recognized at the Oregon Film & Television Office’s annual awards event. He teaches at Clackamas Community College, where he leads the digital multimedia communications program.