Intercultural Dinner and Show unites individuals as one 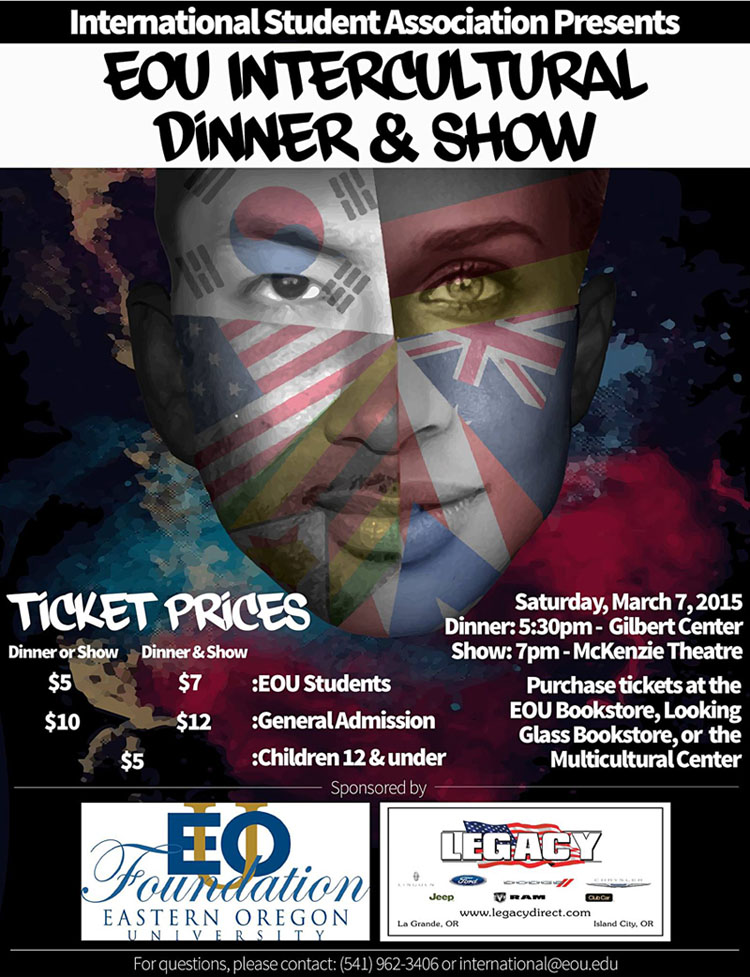 The event appears as an alteration of the annual International Dinner and Show, which had provided the community, EOU students, staff and faculty with the opportunity to see, hear, feel and taste diversity through international cuisine and performances since 1987.

“This year we decided to do it a little different,” said Kuzivakwashe Kambasha, senior and outgoing president of ISA, who is dedicating her time and passion for what will be her final participation in the event. “We wanted to show that a person doesn’t have to come from a different country or continent to have a culture or a tradition,” she said.

The show will focus on the exploration of cultures and traditions around EOU’s campus and the La Grande community.

“I think this will help people identify with certain groups and build unity among students and community members,” Kambasha added.

Dinner starts at 5:30 p.m. in the Gilbert Center adjacent to Ackerman Hall.

“I always enjoy the variety I find at the dinner and look forward to tasting food that I have never seen or heard of before,” said Mio Aoike, a past attendee and adjunct music faculty member at EOU.

Following dinner, the show starts at 7 p.m. in McKenzie Theatre in Loso Hall.

Zumba moves by 25 toddlers from Heidi Ho, and Haka, a traditional warrior dance from the Maori tribe in New Zealand performed by EOU football players, are among the must-see performances.

In contrast to these vigorous numbers is a serene traditional dance from Laos presented by an ISA member Gabe Tzeo.

Closing with the song “One Tribe” by Black Eyed Peas, ISA emphasizes the value of respecting each other regardless of where people are from.

“We are one school, one community and in essence, one tribe,” Kambasha said.

Tickets are available at the EOU Bookstore, Multicultural Center and Looking Glass Books.