LA GRANDE, Ore. (EOU) — Eastern Oregon University’s chapter 277 of the Honorary Society of Phi Kappa Phi has selected Jim Benton and Chris Cronin as honored members of the nation’s oldest and most selective collegiate honor society for all academic disciplines.

Benton is an instructor of English and writing and Cronin is the regional director of EOU’s Grant County Center. 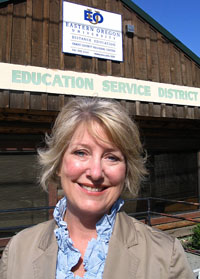 Benton and Cronin demonstrated excellence in the performance of duties serving the institutional mission of EOU.

Selections are based on the nominees’ qualities as illustrated in the nomination submission including excellence in research, teaching, community service and leadership.

Founded in 1897 at the University of Maine and headquartered in Baton Rouge, La., Phi Kappa Phi has chapters on more than 300 college and university campuses in North America and the Philippines. Its mission is “To recognize and promote academic excellence in all fields of higher education and to engage the community of scholars in service to others.”

The society has awarded approximately $14 million since the inception of its awards program in 1932. Today, $1 million is awarded each biennium to qualifying students and members through graduate fellowships, undergraduate study abroad grants, member and chapter awards and grants for local and national literacy initiatives.