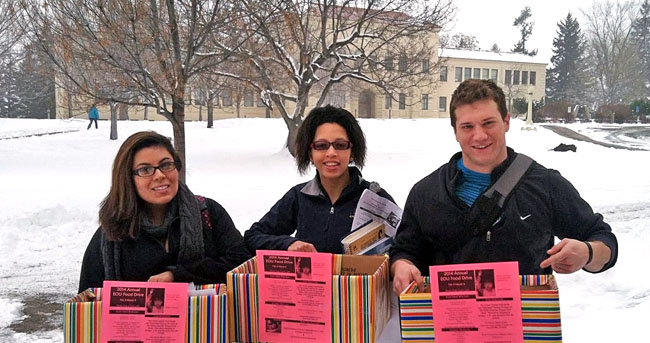 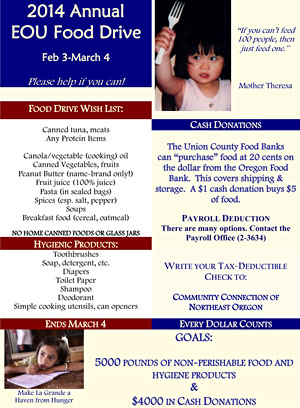 February 19, 2014
LA GRANDE, Ore. (EOU) – The annual Governor’s State Employees Food Drive is in full swing and organizers at EOU are hoping to see donations increase during the final push of the campaign.

Contributions from faculty, staff and others will be collected during February and given to Community Connection for distribution to food banks serving La Grande, Cove, Union, North Powder and Elgin.

“Community Connection has come to depend on every source of donations they can cobble together, as supplies from the state food bank have decreased over time, relative to demand,” said Bill Grigsby, associate professor of sociology at EOU.

Grigsby works with students to manage an emergency food pantry serving the community, as part of the anthropology and sociology department’s Haven from Hunger initiative.

Coordinating the drive this year are students in Grigsby’s class on social welfare practices. They’ve posted fliers, placed donation boxes in campus departments, and will make rounds to pick up contributions when the drive concludes Tuesday, Mar. 4.

“We are currently down 90 percent of the donations we normally have at this time of year,” said Theo Miller, a senior anthropology/sociology major whose concentration is social welfare.

“Every donation makes a difference, no matter how seemingly small to the donor,” Grigsby added.

There are several ways to contribute to the drive and all donations are tax-deductible.

Employees may bring non-perishable food, cash or checks made payable to Community Connection, or set up an automatic deduction by contacting EOU’s Payroll Office.

Asking for donations as admission to events on campus or in the community is also an option. Individuals interested in doing this should contact Grigsby to help arrange the details.

According to the Union County Friday Backpack Program website, approximately “50 percent of the children in Union County are eligible for free and reduced breakfast and lunch.”

This means 50 percent of children in Union County are living in food insecure households. The Backpack Program defines food insecurity as “a household that is uncertain of having or being able to acquire enough food to meet the basic needs of all household members because of insufficient money and other resources for food.”

At the statewide level, the Oregon Food Bank reports indicate that in an average month, an estimated 270,000 people in Oregon and Clark County, Wash., ate meals from emergency food boxes during the past year. Of those, 92,000 were children who weren’t always sure where their next meal was coming from.